Magical Camp was held on September 1st and 2nd in Sapporo, Japan. The festival started at 13:00. The sound of rehearsal came up as we approached the venue from the parking lot. The venue was Sapporo Teine known as the winter resort. With the perfect location with a full view of the city and the vigorous music in the open air, we had a lot to look forward to. 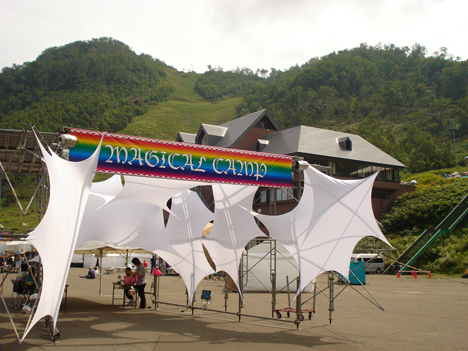 This event started from this year was produced by a long-established soup curry shop “Magic Spice“, which is no to mention in Sapporo and also has branches in Tokyo and Osaka, and was held to raise awareness of a charity and ecology while enjoying music. All the proceeds without expense will be donated to “Save the Children“, an international aid agency (NGO) for children, working on activities to give an opportunity and a hope on education to the children, who are in difficult situation to get an education due to the influence of armed conflicts. 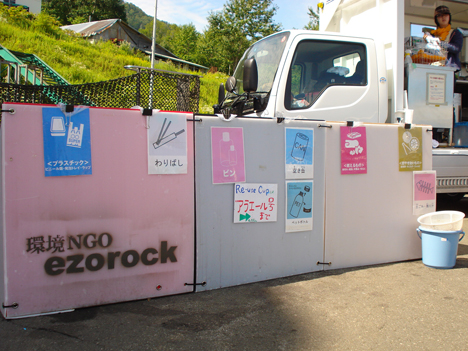 As may be expected of an event with a theme of ecology, there was a movable dishwasher called “Araeru” by Ezorock, NGO Association for environment. They had also trying to reuse drink cups. However, discarded cigarette butts or empty bottles were seen everywhere in the venue. To bring about changes in participants’ attitudes might remain to be solved. 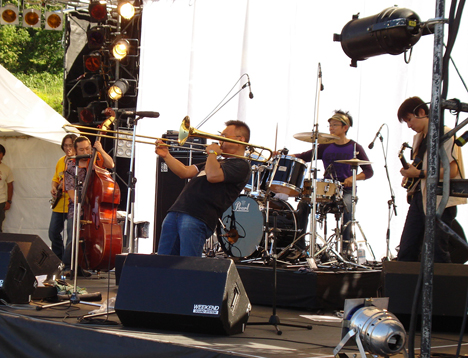 Well, the actual event started in the hard daytime light from a performance by Agharta, a Sapporo based jazz rock band who plays 90% of improvised music. Having a taste of Miles Davis, they showed their original music with various instruments such as drums, bass guitar, trumpet, maracas, flute, and keyboard harmonica. The audience started swinging bit by bit, and the stage was filled with uplifting feeling with big applause at the end. 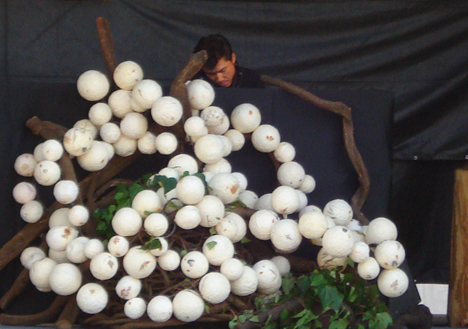 Following this, at the DJ booth set up next to the main stage, one of the best DJs in Sapporo doing DJ for 15 years, Takahiro Nakagawa a.k.a HEATIN’ SYSTEM started playing with lighter jazz numbers. He made the event’s atmosphere.

The DJ booth was decorated by a lighting artist Mako from Microkoubou. The lighting made by natural materials such as wood and winter cherries showed vigorousness and beauty of the nature. It was a graceful art work as if lighting up viewers’ mind.