Exhibitions of plane arts may be carried out somewhere today as usual. I often take a visit as well. It is not that unusual. However, isn’t it unique if the designing company was an independent project involved all employees; and only works passed the examination by designers in Tokyo can be displayed?

The company performed this kind of project was a designing office in the city called Terashima Design Co.. Explaining more detailed, ten people including nine staff designers excepting the president and an additional designer made five each advertisement posters voluntarily. Then, 15 designers from Tokyo and other places inspect those works. Entire works are about amount to 70 and the rule is that about top 30 of those are to be exhibited. It means there may be some people that none of his or her works are to be displayed. Isn’t it quite a hard situation for them? Nonetheless, as a result, there were nobody who did not have their work displayed at all. 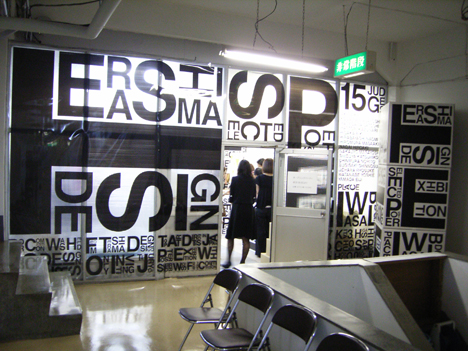 On the first day, I went to the opening party at the exhibition hall. The exhibition place was a rent vacant room in the building that the office of Terashima Design Co. is situated. I arrived there around 6pm right after the party started, and the room about 50 acres was already full with people. I could see the high interests to the exhibition. Looked like many participants were people involved in design or printing works. 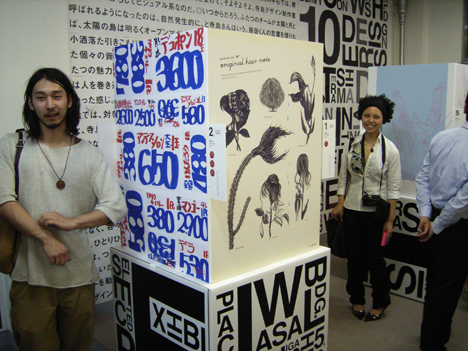 The way of displaying was not a common way to place on the wall. They made a lot of original designed square boxes from cartons, and placed works on those. In addition, those carton cubes became tables for the party. They took this way because the room was not for a gallery space and it was difficult to show on the wall. Though, I thought it was interesting since the method created a totally different view of the gallery. Also, there were comments by 15 designers who took part in the examination on the interior wall. It is instructive to appreciate works by reading those. At the reception desk, A4 sized brochures with more than 40 pages; postcards of exhibited works; eco-bags; and other abundant original goods were on sale which was a matter of concern of participants. 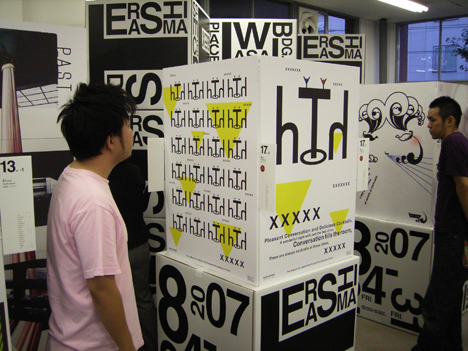 At the exhibition room, I interviewed Mr. Terashima the president of the Terashima Design Co. who was busy corresponding with visitors. He originally started the project at the staff Mr. Fujita’s suggestion. At the beginning, it was a subject that everybody exhibits independent works just normally. Then, the plan developed to ask an examination to designers in Tokyo. The appearance of staffs creating posters for the exhibition looked painful more than joyful. Because the result of the exams of the works that were sent to Tokyo came back by FAX one after another, he said that everybody paid attention every time the FAX received a message. 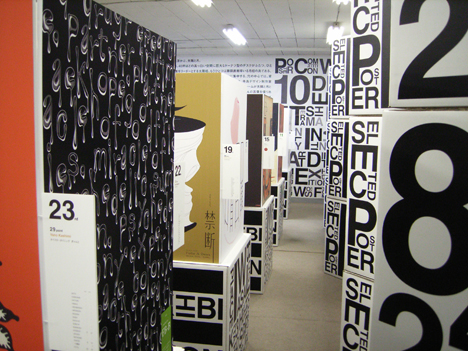 Including the concept and the way of display, it was worth seeing exhibition. Exhibiting plane works unconsciously sounds like ordinary, but by polishing a project, it may turns out extraordinary for both exhibitors and audience.