The so-called Grand Tour is arguably the largest series of contemporary art events of the year 2007, as the triangle of three major international exhibitions happened to take place within the same year; the Venice Biennale takes place every two years, documenta 12 happens every 5 years, and the Sculpture Projects Muenster takes place just once every 10 years. 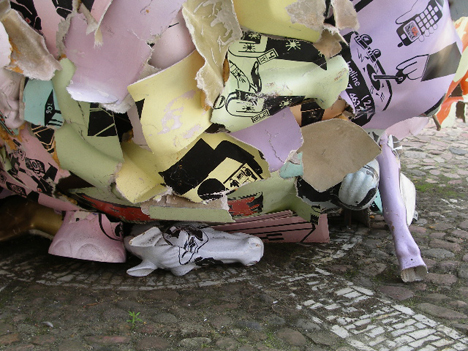 Andreas Siekmann, Trickle down. Public Space in the Era of its Privatization

The Sculpture Project Muenster, which has the longest cycle of the three, was initiated by Klaus Bussmann in 1977 as an international exhibition focused on the various sculpture forms of the 20th century and their associated meanings. Furthermore, the exhibition had the purpose of questioning the relationship between art and the public through installations in outdoor public locations so that people could discuss their concepts, meanings, development, recent trends of public art, and its future.

39 sculptures were installed in the last three exhibitions and they remain viewable all over Muenster. The audience can visit and see the actual works made by some of the worlds’ top most represented contemporary artists such as Donald Judd, Claes Oldenburg, Daniel Buren, Dan Graham, Jenny Holtzer, Rebecca Horn, Francois Morellet, Giuseppe Penone, Richard Tuttle, and Richard Serra. This year, 36 contemporary artists were commissioned for the project. 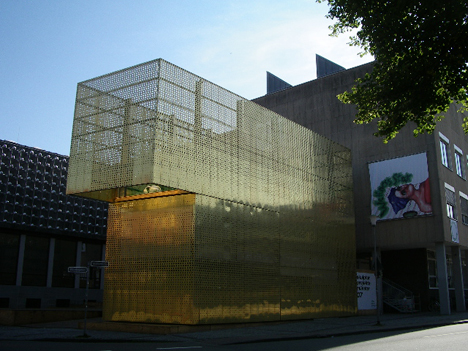 Switch+, a temporary architecture installed during the Sculpture Project exhibition as an experiment

Introduced here in this article are the works by some of the 36 commissioned artists this year.

The first one is Square Depression by Bruce Nauman, who graced the Grand Tour special edition cover of the world’s leading contemporary art magazines, Art Forum and Frieze Magazine, flaunting the beauty of the work against all the numerous other works exhibited in the Venice Biennale, documenta and Muenster Project. 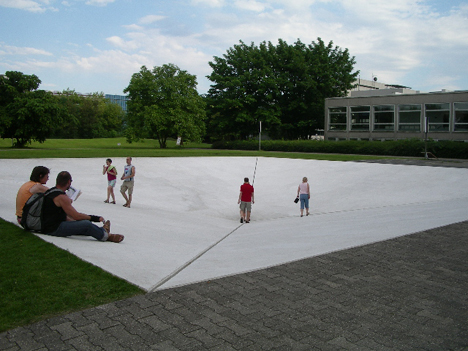 This work, was initially proposed by Nauman for the 1st Sculpture Projects Muenster held in 1977 but it was not successful in getting approval from the government’s Department of Architecture. This work, however, was to be produced and presented at this year’s project after a 30 year wait.

An area of 25 square meters was dug into a shape of a reverse pyramid to the depth of 2.3 meters from the ground at the apex, and all the faces of the pyramid were covered with white concrete. It created a complete white hole on the site of the Science University, which was surrounded by the green. Audience members would walk into the site towards the pyramid overlooking the white hole standing out in the view, and when they got to the apex to look up, they would only see the blue sky above them.

When standing in the reverse pyramid, the ground level was just above the eye level, which made the edges of they pyramid look like a horizon. There were also other audience members looking up to the sky as I did, and others were just looking down on the bottom of the pyramid trying to walk down to the apex. All of us were supposed to be in the same place at the same time, but each individuals experience was different from the others. This was the very first time that I came across an art piece that would make the audience face their true selves even though they were surrounded by many people in a public space.