Lulu is a young motion/graphic designer based in Beijing. The banner motion graphic design for Get It Louder, which had been featured on Shift until recently, was also by her. She is a very active designer with so many works with clients, but she is also active with her own work as well. We interviewed Lulu, who is currently having an exhibition at the 789 Art District, which is also featured on Shift. 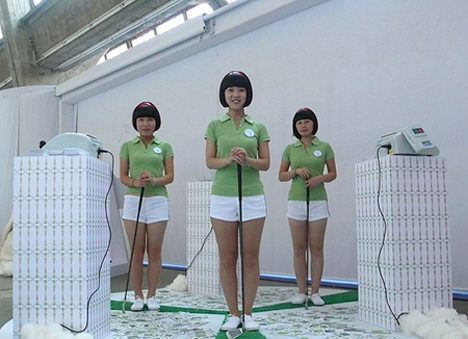 Lulu. I am a graphic artist, more like a visual artist I would say. Currently freelancing in Beijing.
I was born in ShangDong, I studied art.1996 I moved to Beijing till now. I worked in south east Asia for a while then move back to Beijing. I started work as motion graphic designer since 1998. 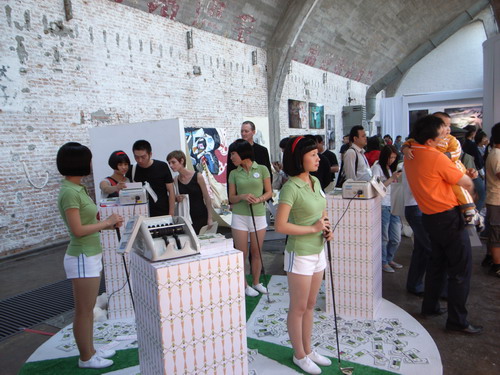 Could you tell us about the exhibition at 798 art district?

The exhibition at 798 right now is called “Cotton In Art”. I am one of the participanting artist.

I get to work with a golf clothing brand called Ashworth from the USA. The original idea was to play golf instruction flipbooks (look like US dollars) on a money counter. Why golf instructions? For people who doesn’t know golf never buy golf products, so education is the first step. I am here to help create a need which is known as a well-used marketing method. The more instructions playing through, the more possible business it generates.

In the end the instruction videos are way too long to be realistic. Instead I choose funny clips of people making mistakes when learning golf which put the learning process back into the learner’s hands, which is “the more mistakes you make the faster you learn”.

In the show there are 3 girls dressed up like my character Lightning Babe, helping to play the notes on 3 money counters on top of a small golf course setup. 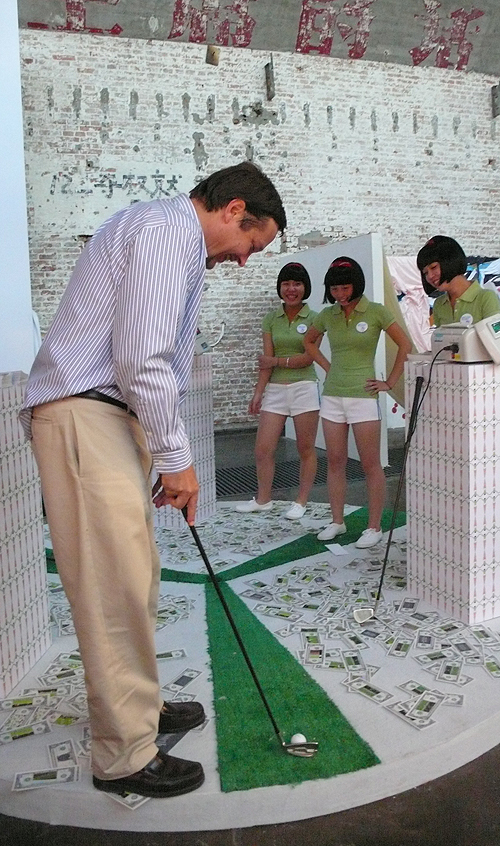 How was the reaction from the audience?

At first people didn’t know what it was till my Lightning Babe start putting big stacks of dollars into money counter and playing it, and they see the moving images flipping through.The movies are funny clips of people making mistakes when playing golf. I think the content doesn’t matter that much. People’s main reaction is “oh it’s a flipbook, I get it.”

What do you think of your activity in Beijing?

I think it’s positive step for myself.