Below is an interview with a superstar in the Japanese Graphic Arts scene, Mr.Keiichi Tanaami, who started his carrier in the 60’s and is still active on the front lines. 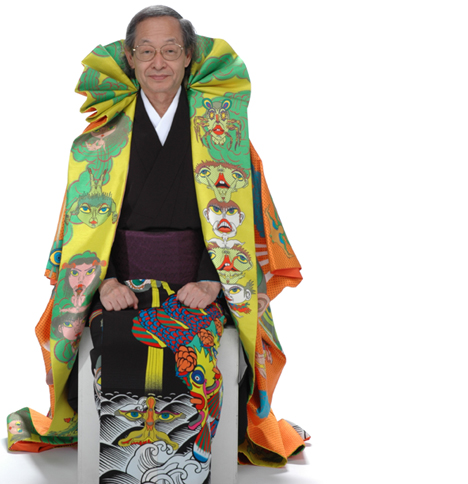 First, please tell us a little bit about yourself.

I was Born in 1936 in Tokyo. After graduating from Musashino Art University, I worked for Hakuhodo for a year and became involved in the underground scene which was full of fun creative activities such as animation, paintings, illustration, and editorial design. While I was primarily involved in design, I was also attempting experiments with video. The films I worked on were showing in places in the world like Oberhausen and Edinburgh. In 1981 I was hospitalized for three months due to pleurisy. I had nightmares and hallucinations about pine trees. After I got out of the hospital, I began to incorporate many things with Asian aesthetics such as misshaped pine trees, cranes and elephants. In my representations – I rendered my memory and dreams with painting, video, and printing. Currently, I’m a professor at Kyoto University of Art and Design in the information design department. ・In charge of artwork with six fashion designers (collaboration with GUCCI, MUMU, etc) for the magazine “Wallpaper” out of England.
・CD cover art for England’s Rock band “Super Furry Animals “Hey Venus!”” (Rough Trade Records)
・Cover artwork and feature article and interview in German art magazine “jpeople”
・Will be broadcasted in “Japanorama” series by BBC this spring
・Invited as a screening committee for “Area.2 world’s 100 designer” by Phaidon, England.
・Feature article and an interview for a magazine “Gunsfeldt” U.S.A.
・Exhibition for “ROCK’N’ROLL” ,which also Tony Oursler, Andy Warhol and Maple soap have exhibition, at Norrkkoping Art Museum, Sweden.
・Exhibit five new pieces for “PALP 11” which is an exhibition of 11 artists (Richard Prince, Warhol, etc) living in Oslo, Norway working for fashion and music magazines.

Due to the increase of international work, it’s getting hard to catch up with my work in Japan. Recently, I created a thirty second animated commercial for NHK Broadcasting, which will be on air in April. Also I’m working on this film “Issunhoushi” with animation writer Nobuhiro Aihara. (we expect it to be shown in the Image Forum Festival in May.)
The latest anthology “LAYERS OF KEIICHI TANAAMI” (Seigensha, Inc) is now on sale. What do the 60’s represent to you?

When I look back down my winding road I can see bright lights shooting from that special period in the 60’s. Everything was born in the 60’s: graphic design, editorial design, animation, experimental film, painting, printing, dimensions, and has now matured. For myself I was young and immature, but my saving grace was “going for it.” The excitement of the period was pushing me in the back and kept propelling me forward. That was my 60’s.