Showcasing a new language of AV, and embracing the whole structure of the audiovisual.

It’s always exciting to feel like you’re a part of something “new”. Art, fashion and design fads come and go, but there’s always one thing artists can rely on to explore new territories, or push a few boundaries, and that’s our good friend the computer. And some of the most exciting explorations seem to be happening in the audiovisual realm, where artists are finding new ways to engage the senses through fusing moving images and sound with programming and innovative software tools. 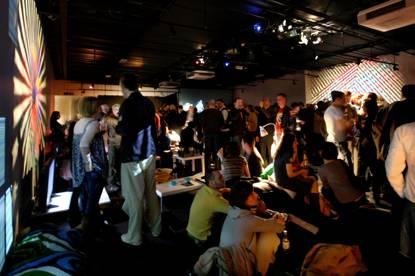 The Optronica Festival, held recently in London, set out to showcase this emerging artform. Often referred to as ‘AV’, or as stated on the Optronica program, ‘visual music’, the progam was held over five consecutive days, with live performances, talks, animation screenings and VJ workshops.

Live sound performance on its own is powerful enough. Add the moving image, and artists suddenly have a lot on their hands to deal with. Which comes first, the sound or the image? Does the image trigger the sound or vice versa? What is the relationship between the two? And as the audience, how should we expect to be entertained?

All these questions only became more evident at the Optronica Festival, with performances by established artists from all sides of the AV spectrum, coming from backgrounds in professional art practice, cinema, music, DJ and VJ culture, and all interpreting the medium in different ways. 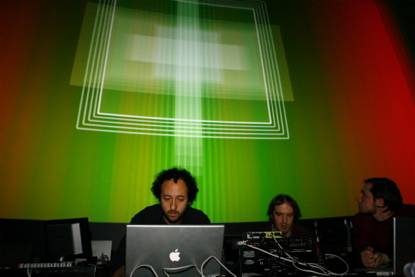 The Festival opened at on a Wednesday night at the British Film Institute’s massive IMAX cinema, a sold-out and much anticipated event featuring music duo Lemon Jelly and DJ/music producer Trevor Jackson. With both artists known for their music bent rather than their visual exploits, it was a bold beginning. The potential of the huge screen and pumping speaker system was unleashed on the audience, with Lemon Jelly’s ‘Iota: Inventions of the Abstract’ piece, and Trevor Jackson’s ‘RGBPM’ both highly impactful with their pulsating, geometric abstraction. It would be hard not to be riveted by the sheer scale of the IMAX screen – you could almost play out a continual test pattern and still have people mesmerized. But after the initial daze wore off, and the repetitivenes of the pumping house/techno music sunk in, it started to feel more like sitting in a comfy chair in a nightclub, rather than in a cinema. Not entirely engaging, but interesting to see what happens when a handful of music figureheads get the chance to add vision to their soundscapes, on a huge 2000 pixel-wide canvas. 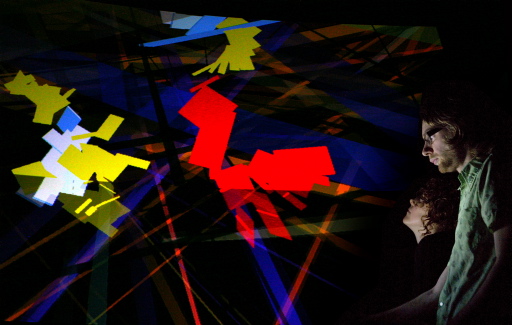 While this style of performance was not to everyone’s taste, it was hard to find fault the following evening’s performance by UK-based artists Semiconductor. The endearing uber-nerd couple presented two AV performances, with the most fascinating work entitled ‘Brilliant Noise’, an animation constructed from solar images of the surface of the sun, sourced during their residency at the NASA Space Science Laboratories. The sun’s surface flared and flickered, accompanied by a minimal electronic soundscape of zaps and whooshes, a perfect setting for the piece, which felt like a weird version of an IMAX space documentary. Artists Ruth Jarman and Joseph Gerhardt describe their work as ‘sound films’, where the sound triggers the computer code into action, subtly shifting pixels in a footage sequence or playing havoc with abstract shards of colour.