This month, I will introduce some art works that caught my eye at various galleries I visited.

First, is a young Brazilian video artist Marcellvs L. When I stepped in the middle of the exhibition I saw a huge screen hanging down from the wall. On the screen there is a mirror image of rope which was floating and sinking on the water surface the floating rope in the water is a usual everyday scene; however, this is something individuals hardly ever focus on. Marcellvs establishes interesting scenery as he recreates it by incorporating video footage with objects common to that particular scenery. 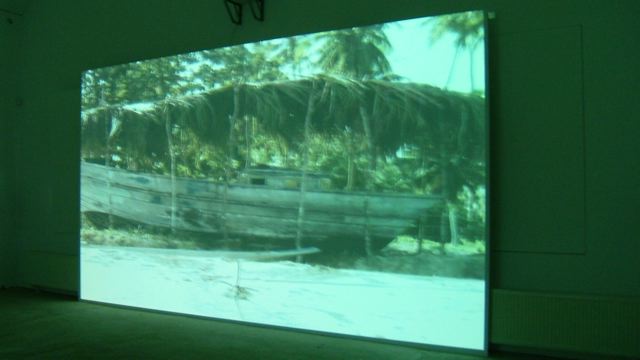 He was also exhibiting other pieces with different motifs such as people walking on a street under a strong sunshine and people fishing at lake. It seemed the artist picked out new scenery from all the processes themselves captured by video, which cannot be expressed with words.

Next is Lara Favaretto’s art work. One of Lala’s pieces was simply a black bag entitled “Lost & Found”. This bag was sitting by the entrance of her space inconspicuously. However, I heard a thunderous sound that sounded like it was coming from a machine in the back room. 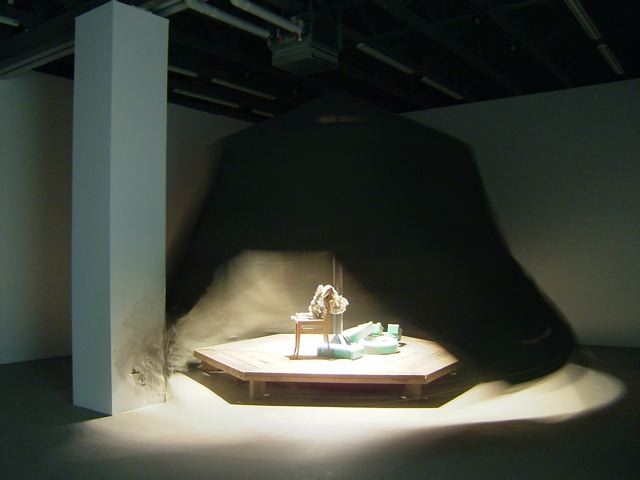 When I stepped forward to the place where the noise was coming from, a canvas fabric whirred fast in the dark room. Part of the fabric was slapping against a pillar. A part of the post had broken away from the constant slapping from the canvas. As I stared at this piece I noticed something in the inside the spinning canvas fabric. As I watched I began to wonder what was inside. I wanted to walk in closer, but thought to myself that I should observe it from outside after I remembered that this machine, like the insane merry-go-round, was named “It Began While It Was Already Over”.

It was some kind of bad feeling like looking at someone beyond their state of minds. Through Lara’s pieces I could almost experience that feeling with humor and in an unrealistic way.

The biggest commercial gallery opened in the wedding district, which happens to be a very famous area for Berlin’s art scene. Many art spaces like Cluster, which we had been introduced here on the web, are here in Osram Hoefe. Galerie Max Hetzler, already has a space here, has been recently expanded for a fresh start of this gallery. 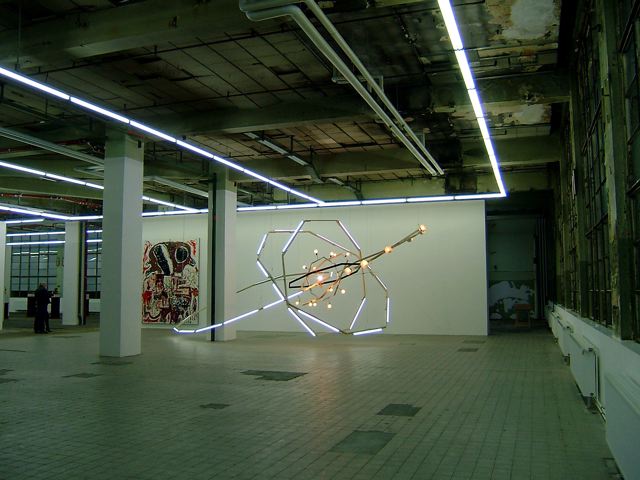 For the grand opening, the gallery’s main focus was on introducing young writers such as Bjoern Dahlem, Guenter Foerg, Georg Herold, and Thilo Heinzmann.