I have had a vague sense that, since I came to Berlin, there are so many people who relatively freely cross the border here in Europe, as if there are no borders. It was the exhibition “This Land Is My Land” that supported this feeling, in a positive and negative way, and I introduce now. 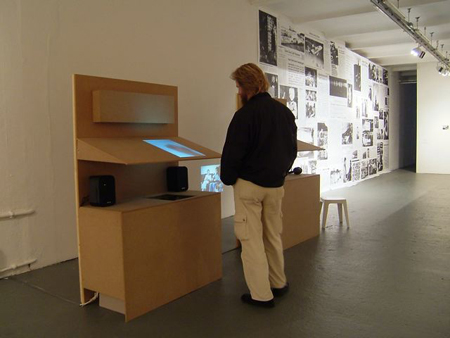 I had an impression on this exhibition that there don’t lay paintings, sculptures, documentaries but something as contemporary art. 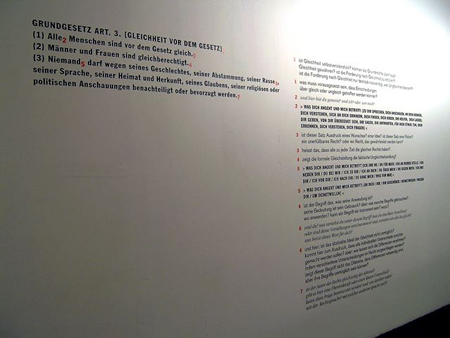 On the wall to the left of the entrance was Thomas Locher’s piece, an attempt at defining “equality” before implementation of the Basic Law for the Federal Republic of Germany. And there were the comments, which amounted to 7 to 8 times as much text as the definition itself. What was more, there were sometimes 2 or 3 comments just for a single word or phrase. It suggested that interpretations vary across the demographic, that this basic law, or more specifically
equality, was fluid. 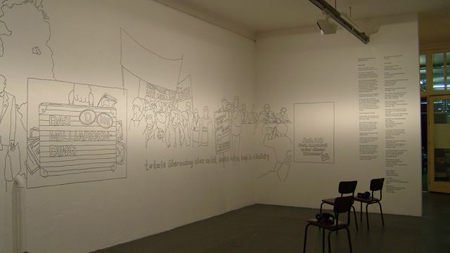 At the front of it were sketched the various events that colors the German history after the war. For example, scenes from the conference when the Green Party visited East Germany, a demonstration with participants over 300 thousands against expansion in armaments in 1981, the election campaign of CDU (Christlich-Demokratische Union) in 1990. They were never treated as historic events, but I’m sure that they were significant and would talked about by someone somewhere when we take a look back in history in different perspectives. The piece was by Florian Wüst’s, which inquired how we should have viewpoint on “History”.