When I was 7 years old, the world of gambling was introduced to me through the 1989 Hong Kong film, “God of Gamblers“. Inspired by the near-supernatural powers and sleight of hand techniques wielded by Chow Yun-Fat’s ultra-cool gambler character, my friends and I developed a deeper investment in our card games, graduating from Go Fish to Big 2. Big 2 sessions were punctuated with imitations of Chow Yun-Fat’s signature move – rubbing a card between his palms in hopes of changing it to an ace of 2. While this technique is actually a form of hand mucking, our interpretations of the ‘palm rub’ rendered it full on enchanting, accompanied with a playful desire to magically change the card. These childhood sessions of Big 2 games are the closest I’ve ever come to gambling. Nevertheless, their wistful palm rubs came to mind when I went to the opening of “Octomania (on drawing the number eight)“, a group exhibition curated by Christina Li at Para/Site Art Space, which examines the relationship between gambling and divination. 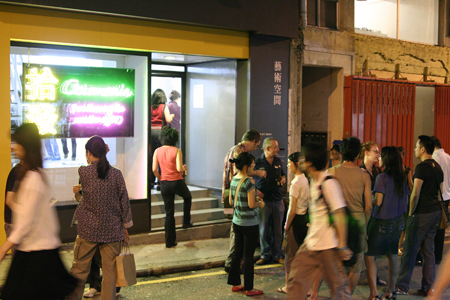 Inspired by the local genre of gambling films that originated with “God of Gamblers”, “Octomania” brings together five artists from the Pearl River Delta region, including Hong Kong, Guangzhou, and Macau. Situated within the PRD, the exhibition attests to the intertwining roles of traditional folk culture and gambling in a Chinese context. As a system of beliefs apart from, yet influenced by clerical religion, Chinese folk religion is embedded into everyday culture. Likewise, as the earliest accounts of gambling were recorded in China (2000-1500 B.C.), its contemporary manifestations, from household mahjong to the casino halls of Macau, reveal its integration into Chinese life. Moreover, the influence of folk beliefs and superstitions has made its way into the practice of gambling, best exemplified in the role of homophonous lucky and unlucky numbers. For instance, the exhibition’s Chinese title (Sahp Faat), plays on the Cantonese homophony of the number 18, which is similar in sound to the phrase, “definitely prosper”. 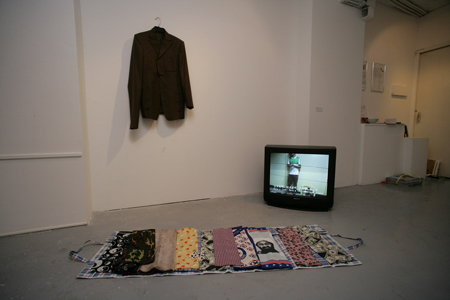 With paintings, installation, and mixed media work, themes of old customs, idol worship, and hollow desires, along with their present-day negotiations are explored. Zhou Tao’s installation, “Wish you make a pile”, presents us with his absurd interpretation of the ‘business sleeve’. As depicted in old Chinese films, the extended sleeve conceals the secret handshakes between two people during monetary negotiations. Tao’s video documents his attempts as a street vendor for his contemporary business sleeves, essentially 2-foot long tubes available in various fabrics, including American flag print, Osama Bin Laden print, and acrylic fun fur. The video also includes a scene of a hilarious silent handshake transaction between two businessmen donning three-piece suits with one elongated sleeve. A suit from the video, as well as the street vendor display, accompanies Tao’s installation.