One of the most prolific contemporary artists from Japan, Bikky Sunazawa was a man of great vision. Using traditional art and techniques as a base, he created truly inspirational works. Though primarily working with wood, creating magnificent sculptures, he also produced drawings and paintings of equal caliber. Bikky’s works appear to varying degrees in many places around Hokkaido. The following are just a few selected pieces of his astounding repertoire. 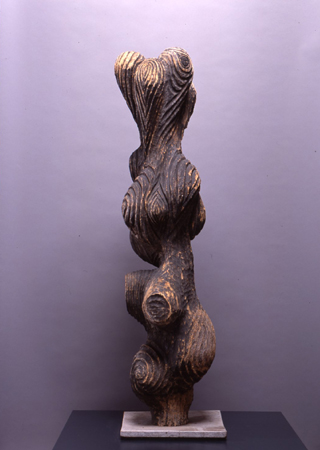 Among the ranks of his earlier works sit the biomorphic shapes of Bikky’s “Animals” series. This series also stands apart as his first foray into abstract sculptures and eventually led to his acceptance into the Modern Art Association of Japan in 1962. “Animal Me (B)” (1963) in the Bikky Atelier 3Moa, at first has the appearance of a tree trunk full of knots, however on closer inspection it begins to take on animalistic forms. While it may appear as something else to others, I kept seeing it as an Elephant. In this sense it serves as a three dimensional “ink blot,” you can see anything in it depending on your angle and interpretation. The texturing on this piece is astounding as well. The smoothly careening lines accentuate the curves and add depth through the play of light and shadow. Standing at roughly four feet it is an intriguing display of skill and technique. 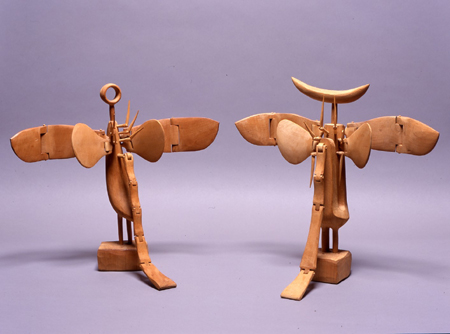 “Today at 3:00AM” (1987), also at the Bikky Atelier, is a series of wood sculptures created in the guise of fanciful creatures. Standing only about a foot and a half tall with little wing- and tail-like appendages, they really seem like a vision witnessed in the early hours. They are created of a light coloured wood and sanded to smooth perfection. One seems rather petite with smooth curves and a small round ring for a “head”, while the other is bulkier and crowned with “horns”, giving off the feel that one is female and the other male. Both feature articulated joints in the wings and tails as well. It is easy to imagine these little creatures flitting through the air. They really evoke a sense of playfulness and joy. 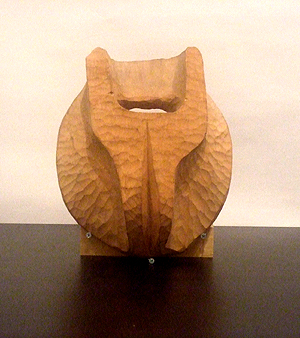 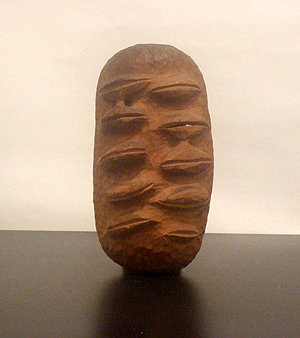 Each mask-like creation of Bikky’s “Ki-Men” (1975) is different in shape and size and in the feelings it can stir. This is likely due to the method with which he created them. Each mask is formed around the meaning or shape of it’s corresponding “Ki” Kanji. Around 150 of these were eventually created. Some are abstract shapes, others animal-like and still others appearing as odd, even fearful creatures. In the wide selection at the Eco Museum Osashima Center Bikky Atelier 3Moa, there is one that is oblong in shape and has ten protrusions on the face. This one was slightly menacing to me due to my interpretation of those protrusions as mouths. It seemed like a monster from a nightmare. Someone with an understanding of the Kanji it comes from would no doubt interpret it differently. Another mask comes in a circular shape with three prongs on it’s face, two pointing up and one down. Directly opposite the down facing prong a long, thin hole was created. This one seemed to me to carry the shape of the head of a bull and I seemed drawn to it right away. Again though, it is all left up to interpretation. That is part of the beauty of “Ki-Men” and many other Bikky works: the different ways they can be interpreted.