The last day of the festival presents us with a great line-up of speakers. 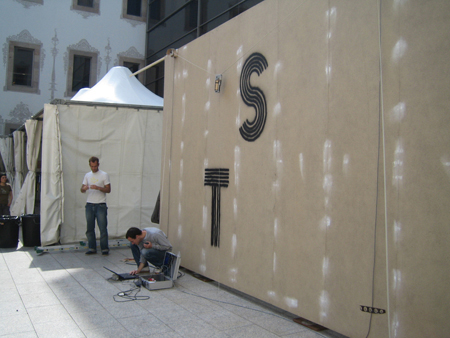 Rob Chiu presents a collection of his motion graphics work. Often based on his brother’s beautiful illustrations he manages to tell emotive stories with his wonderfully executed motion pieces. Rob’s films are somewhat dark and touching. Both a critical film on violence and war and a documentary piece about a schizophrenic person are well received by the audience, who warmly applause Rob at the end of his talk.

Then Erik Natzke is about to start his talk Keep interest(ed). Natzke gives us a full review of his past work and experiments and explains how he enjoys working with ads. He likes to experiment with maths, physics and some interesting algorithms for every single banner. For various clients such as HP he explores techniques like dynamic drawing, fluids simulation, elastic surfaces and more. Finally, Erik presents a project called Comcastic. Developed together with Branden J Hall, Natzke created virtual articulated puppets which can be moved by the user. The puppet system seems to be based on IK principles and looks quite realistic due to some bitmap tricks. 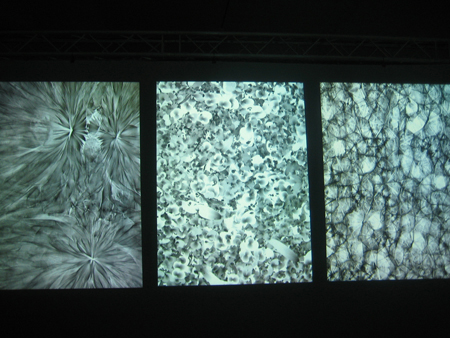 Ben Fry & Casey Reas are probably the most highly anticipated speakers this year. When they come on stage the main hall is completely crowded.

Casey starts by introducing the programming environment Processing, a project originally developed for teaching the fundamentals of computer programming within a visual context and as a software sketchbook and professional production tool. Processing is an open source project used by students, designers, artists and programmers or engineers.

After his short introduction Casey shows examples of his own work done in Processing. He bases some of his experiments on very simple mechanical systems (Vehicles) which he duplicates and iterates several times. He also introduces us to his Processes. Processes contain several forms and behaviors, and are based on very simple principles which generate organic visual responses. Both, Vehicles and Processes are generative programs capable of infinite painting and visualization.

Then Ben Fry introduces his Computational Information Design. Ben’s work is mainly dedicated to data visualization. The human’s genome, literature sources, web logs or baseball statistics are some of the source data being visualized into different systems which keep changing and evolving over time.

Marius Watz presents his sound-driven drawing systems written in Processing.He explains how powerful real-time computer generated graphics can be when projected on large surfaces. “A single frame of video at that size could never be handled…” Thanks to Processing, Marius is able to fill gigantic walls with a single panoramic application generating and evolving constantly over time.

He also shows some of his collaborations with orchestras and musicians: complex audiovisual performances full of beautiful colors and a constant evolving motion responding to live music. 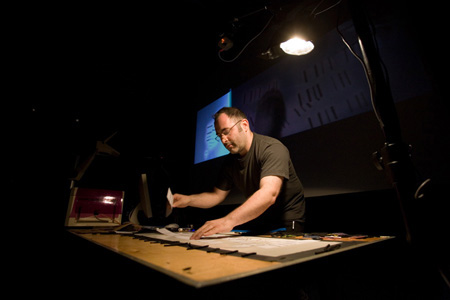 The OFFF 2006 festival is closed by Zachary Lieberman and Golan Levin. Zachary and Golan are two of the top artists dedicated to audiovisual interactive installations. Their work is absolutely amazing and their performance is one of the best OFFF closing events so far.

While Zachary gives a live demonstration of his exhibited installation Golan treats us to a live music performance. He uses an installation based on a video capture system which is able to translate any detected shape into a sound frequency. Although it is extremely difficult to express what we are able to see and feel I’m sure this sensational event delights absolutely everybody.

After their performance, Golan and Zachary explain some of their other projects. They show excerpts of an incredible theater play with a sound-driven and motion-tracking application interacting with actors; and an augmented reality experiment visualizing the human’s voice. Needless to say, there are standing ovations for this great finale of another fantastic OFFF festival.

By now, OFFF has been consolidated as a very important event on the festival scene. Providing a fantastic line-up of speakers the festival has probably one of the friendliest entry fees all around. It is absolutely impossible to visit all shows and exhibitions offered at the festival. The music space Loopita, the film festival, and the Open Room are still considered secondary by many users.

During the first day the festival experienced a lot of technical problems. However, the organization reacted quickly and by the second day everything worked out fine.

The festival’s atmosphere is very inspirational and its location is also a very good choice. Yet as the OFFF keeps growing it might need to change locations in the next years. So although we are really excited about the direction the festival will take next year, we think things already look very promising.We definitely will remember the Barcelona Love Days as a sensational combination of rock’n’roll spirit and pure creativity.