At the end of Golden Week on May 6th, a live-painting event called “HUOVA” was held in Gallery Conceal in Shibuya. The Chinese word for “torch”, HUOVA is a show for those who compete for the title as “the fastest” painter. It was organized by Questa (codec)/ OEIL (Kazenohito), famous for highlighting the Tokyo nightclub scene and was co-sponsored by Porter’s Paints, known for its environment-friendly paints. With the music of bands and DJs selected by the artists in the background, painters drew live in front of an audience in the allotted time of 20 minutes. This was only the second time around, but the expressive movements have already fascinated many people. I would like to report on it as realistic as possible. (… and I even finished this report in 20 minutes to beat the painters!) 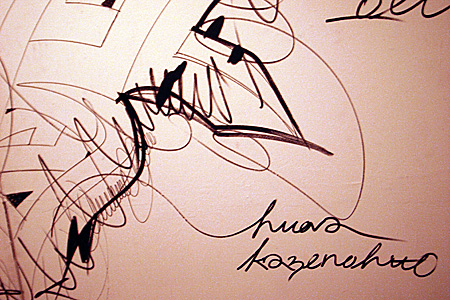 While painting, QUESTA’s profile left a strong impression on viewers. SAL traced the beauty of nature graphically. Looking at the lineup of participants my tension was mounting toward the event. When I arrived late to the event after minor errands, these two painters had already finished. I stood in front of finished paintings with a great regret, because live painting is nothing like appreciating art in a gallery. For this reason I wanted to keep abreast of the remaining three painters. What was about to happen in just 20 minutes? 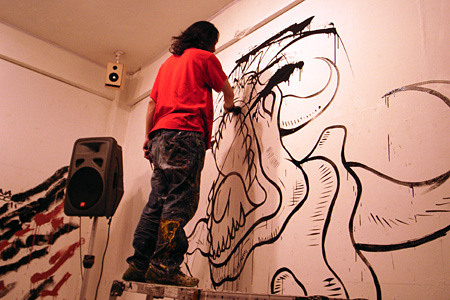 Youta Matsuoka a.k.a Jon Green came in as the third painter! His recent favorite stylized unreal animals appeared. While I was admiring his solid brush strokes, he suddenly started to scribble with black paint over the drawing as if baring his fangs. He said, “I wanted to do something I can only do here.” His 20 minutes were a mixture of his desire for both order and chaos. 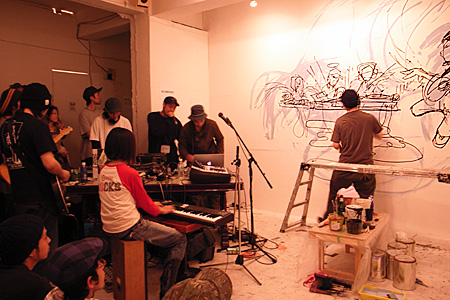 The fourth painter was “KAZ”. While painting, he stole glances at “sense” and his band, which also played during the first event. Plug and cable were connected, and the movement of sound crisscrossed the space. Though he told himself “perhaps 20 minutes was too short…” a drawing of happily grooved and synchronized sound and art was covering the wall. 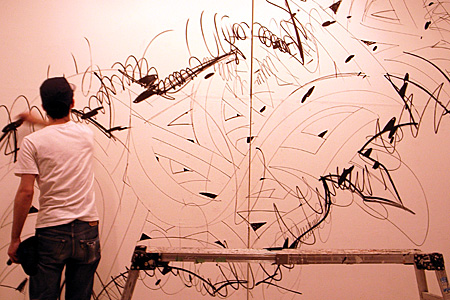 The last painter was Enrico a.k.a. OEIL. Applying his signature style, he seemed like he was dealing with his outline rougher than usual. Was it due to the atmosphere of today’s event? When I asked him, “so, how was it?” he replied, “I think it was a very lively performance this time.” I felt exactly the same. It’s a live performance prepared in a matter of not 10 or 30 minutes, but 20 minutes. Such a timeframe can reveal the situation where one already has one’s own tactics but cannot resist the instincts of one’s hand.

Soon after, the gallery will be painted over again in white and go back to its original state as a white cube. Not a single trace of these conflicts will remain there. The painters in search for the title of “the fastest” are still painting somewhere in Tokyo today.