New Yorker Claire Watkins recently graduated from Virginia Commonwealth University’s acclaimed (and number one ranked) sculptural graduate program, and in this show, her first major exposure in the Greater Washington, DC region, she exhibits four sculptural pieces that employ motors and magnetism to grab attention from both collectors and critics. 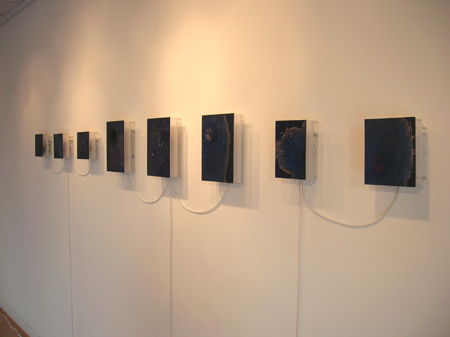 On the gallery’s main wall, three sculptural arrangements hang: two triptychs and a diptych. They are ink and acrylic etchings on a copper plate, floating away from the wall, projected from a plastic armature that hides a small motor. The hidden motor rotates a small magnet, and this magnet, in turn, causes pins and iron filings to dance and move on the surface of the etchings.

The effect is hypnotizing. “They look alive,” comments a viewer, craning her neck to see what’s behind the etchings. In one of the pieces, titled “Parasites,” Watkins has added a circular handful of iron filings, which move and undulate like an underwater plant. “Or a living fungus,” adds a passerby. 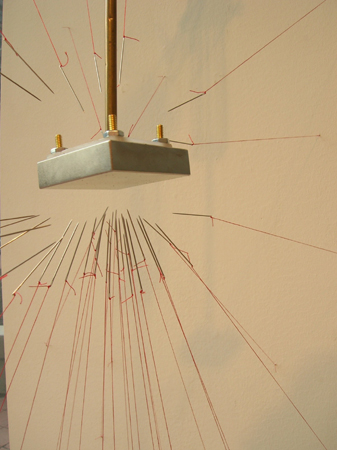 “Flock of Needles” by Claire Watkins

In the corner of the gallery, a square magnet, suspended from a clear plastic bracket rotates slowly. As one approaches the piece (titled “Flock of Needles”), the viewer notes that dozens of needles, attracted by the invisible magnetism, float away from the walls and floor of the gallery, dancing and moving in mid-air, in a sensual and ever-changing dance with the magnet. “The work is as delicate as a spider’s web,” wrote art critic Jessica Dawson in the Washington Post, “and just as magical.” 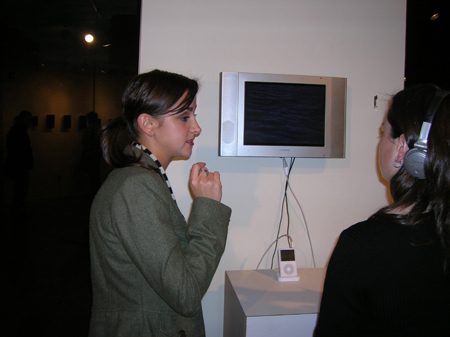 A few steps from the dancing needles, Kathryn Cornelius‘ latest video plays silently from an iPod hooked to a digital projector. On the screen, clouds float away, while the earphones deliver the soft hum of the airplanes’ engines. With this video Cornelius continues her exploration of the repetitive cycle of technology.