The hot 2 days in the eastmost island country. Asia’s biggest international art event “Design Festa“, which is in its 11th year and the 22nd this time, was hold on the 26th and 27th of November. The number of exhibitors was 6,000, participating countries was 36 and visitor was 51,000. This event exactly lives up to above description. 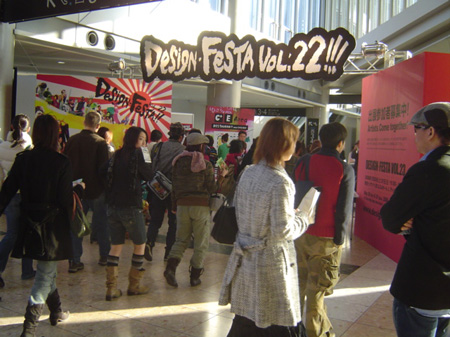 I was firstly surprised at a lot of people when I arrived the site. The space spread from the previous 1 floor to 2 floors this time. However, I often had to thread my way through the visitors. Besides, though it had been the season in Tokyo when scarves had been crucial outside, I sweat a little while walking with my jacket off. Suddenly the term “the exhibitors’ powerful air of excitement” on the invitation went through my head. 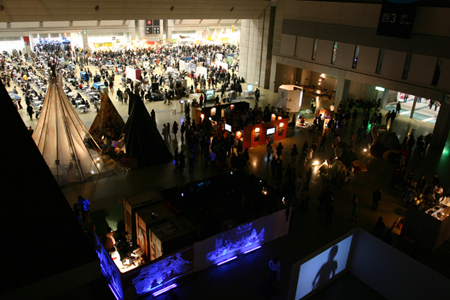 There were the area for booths more than 2,600, for outside live stage, for show, for film showing and for restaurant & cafe with a rich international flavor in the site. This time, benefits of 2 floors were utilized and there was a new attempt that lights were dimmed in partial booths. The following is the introductions of some areas and the outstanding exhibitors with photos.

First is the area for booths, which took up the most part of the site. There were diverse kinds of booths from exhibits and sales of paintings, which may come across your mind, accessory, installation, music playing to chirognomy. Also the exhibitors ranged from amateur to professional, which shows that anyone who wants to can participate in this event. 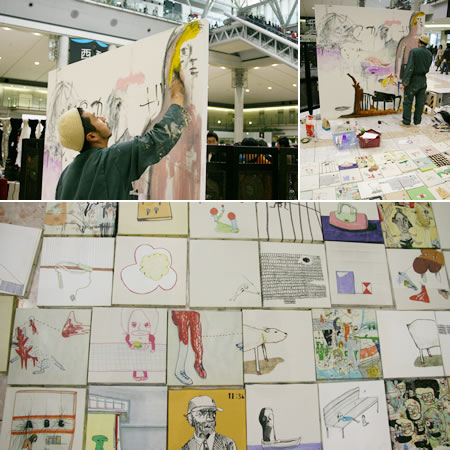 When I entered the site, I noticed the booths by Akira Takayanagi at first. His works on a small square canvas were crammed and he was drawing silently on big wall. I got the impression that his works were cheap at first glance but somehow warm.

The next is the booth by “MAD BARBARIANS x FEWMANY“. This was one booth for the project “MADP”, which took up 30 booths and was organized with MAD BARBARIANS’ idea to gather professional artists, make the area that had high quality and be in the party mood. Various goods were exhibited and sold. 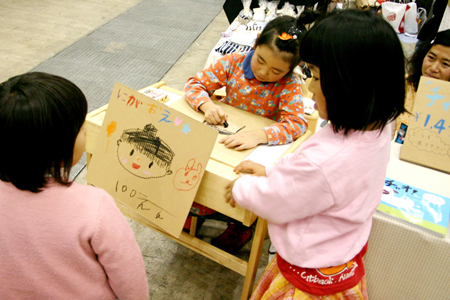 This is the booth that made me pause for a long time. Though there were several booths where the visitors’ portrait was drown, this held the line against them in that little child was the painter. There were smiling faces by the painted and the surrounding all the while.

This is the booth by Hiroyoshi Takeda. With his several paintings, his big eye-catching work was enshrined. It had vivid hue.

There were various pieces that were motivated mainly by light in the new area where the light were dimmed. Also, there was the large space for DJ and VJ. 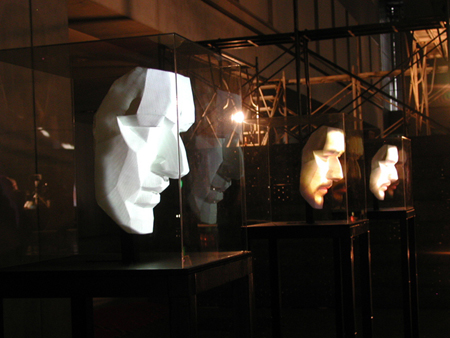 Above all, I was interested in this booth. The movie was playbacked with PC and mirrored with a projector on a white surface which had human-like undulation. There were 3 surfaces side by side. Each was severally mirrored with letters, strange gauche countenance and so on. I was impressed. 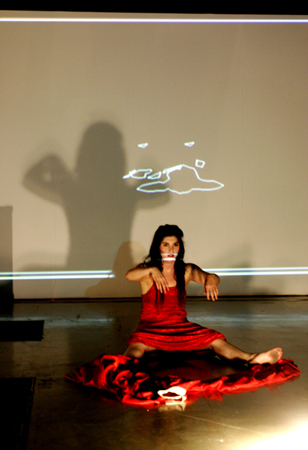 Then, I refer to the space for movie which was together with the area where the lights were dimmed. This is “The Gaikokujin Experimenta” by the group from Australia. The video picture of abstract white lineal drawing was projected on the screen and in front of it the woman on red cloth was moving slightly. Some time later, the woman asked the audience questions with rapidity in English “What’s your name?”, “What’s your favorite Japanese culture?”, “Do you speak Japanese?” and so on. I was made get thoughtful. This was titled new media performance, experimental one.

The last is show space, which was located near the entrance. In this space artists show their works off with heart and soul. This is one of the spaces where you can enjoy Design Festa most. 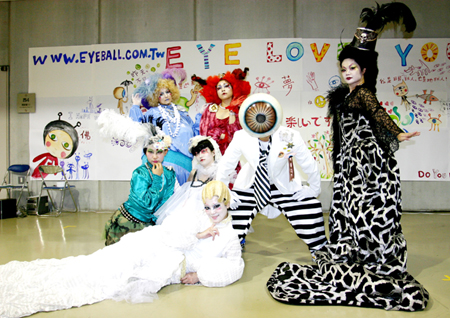 This is the performance by “The Eyeball Loves The Globe” from Taiwan. Based on the title, firstly the man with a mask of an eye appeared. He moved around with unique motion. After it, the next personage came just as he went out and moved around, and the next personage.. Finally, all the personage gathered at once and posed several times with emotional music. With each pose there were many photoflashes. It indicated how deeply the audience was impressed.

This was the second Design Festa for me. I was able to view the whole of it not as point but as line. The next Design Festa is in a half year, on the 20th and 21st of May. The participants are now wanted. Why don’t you try it?