Singapore design being exhibited here is not only by professionals. Here you can see the brisk activity of Design Singapore Council which is working on several projects for young designers. For example, 4 schools from Singapore participated in the work called “Time Capsule”, and young designers express the moment they design as they put their own future images in an acryl case. Moreover, enjoyable 3D animation by students from Nanyang Polytechnic is projected on a passageway called “The Street” in the venue. 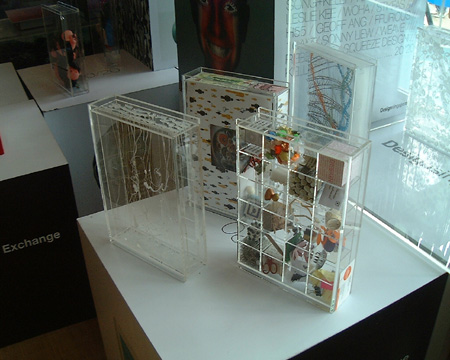 Even though they didn’t talk that much, designers from Singapore who visited this opening showed great zeal. There were also many young designers who hadn’t provided their works to this exhibition. “It is really inspirational to have such a chance in Japan. Please have a look at our works in the next festival.” They said in a highly-motivated way. 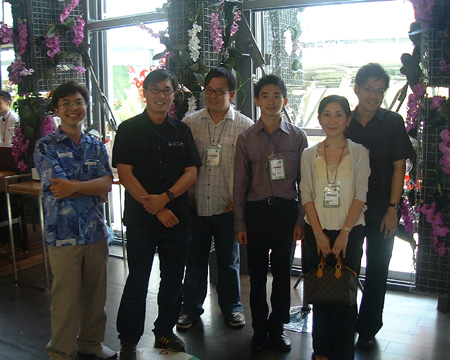 There seemed to be many chances that designers from all fields could gather and inspire each other, and it is really impressive that the enterprising spirit seems to exist throughout the entire country. (From left side on above picture; a chief product designer Michael Sng from Stikfas, a managing director Nathan Yong and a design engineer Vincent Chia from Air Division, a jewelry designer Elise Leu from Aspial, an industrial designer Joe Tan from Enzer, and a senior designer Odell Oi from Unique Design.) 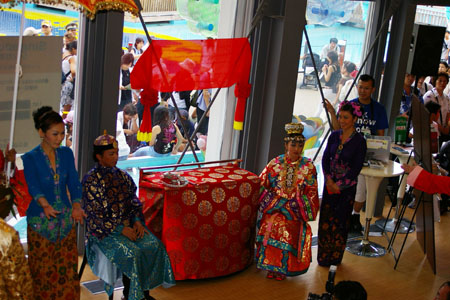 In the interior of switch pavilion a traditional show or introduction of a Singapore wedding ceremony was presented to the audience. The open hall was full of visitors including people who took a look from outside. The theme of Singapore pavilion “World With out Walls” exactly showed the meaning with the open style, traditional bright colors and new vivid colors.

As a whole, it was impressive that Singapore pavilion put an emphasis on inner meaning such as concept or process rather than the surface of design. The same thing can be also said to the theme. This might be one of the special features of Singapore design. Also, they give young or fresh talent an important position, and it showed a hope for the future. While there are many pavilions that have an appeal with their history or nature products, there might be only few like Singapore pavilion that looks forward in the future in such a way.