In these few years, there are public opinions saying that Berlin has been getting “spremely sharp”. At the beginning, when I just had arrived here, there were still conservertive, former West German unpolished sense, and only a flippant retrospective Eastern design had stood out. “It’s nothing great, just a rumor,”I thought. This was my honest impression at the time, However, I eventually had started encountering moments that made me feel like some passioned creators, who heard about the rumor and wanted to try their skills with a follower of a different school, getting together somewhere and making steady progress.

It was in the cafe in Prenzlauerberg that had an atmosphere like that, where I had met Dirk Holzberg, the organizer and the artist of the exhibition that I am going to introduce here today. Indeed, various musicians playing experimental music were gathering there. When I visited there with my friend that day, he was also there by chance. 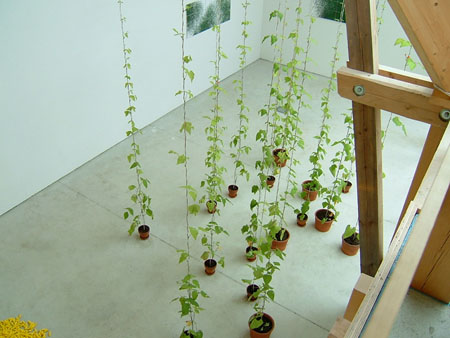 As if those commotions in the town were none of their concern, there was an exhibition called “Nach der Natur (means ‘Towards the Nature’)” in Muenchehofe, the suburb of Eastern part of Berlin. The exhibition place was at about 15 minutes car ride from Friedlichshagen station, which is 10 minutes ride from Ostbahnhof station by S-Bahn (the railroad that connects the center of a city and the surburbs）. The place was further ahead of a reserve for nature and an afforestation area. It was a two-storied house with a wide stairwell in a village that stands still in a calm scenery where stock farming was conducted. Including Dirk, there were seven artists exhibiting, basically focusing on installation. 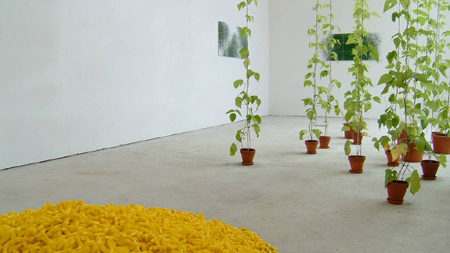 As soon as entering the house, we could see a stairwelled room. There dozens of vined plants growing towards ceiling from flowerpots. Listening carefully, there were a voice of someone. The voice is reading date and time irregularly and dispassionately. Beyond that, there were some hanged tableaus with full use of computer graphics looked like as if many pine leafs were scattered on boards. Towards this side, yellow plastic tapes made into thumb sized balls were piled in heaps. Each of those had subtlety different shapes; thus, each of those looked like as if they had their own life.

Artist of these three kinds of works were Rolf Giegold, Dirk, and Bettina Wachter respectively. These three works were the exhibits in the room, and its structure had an unity mediating between each of their interpretation about “nature”. 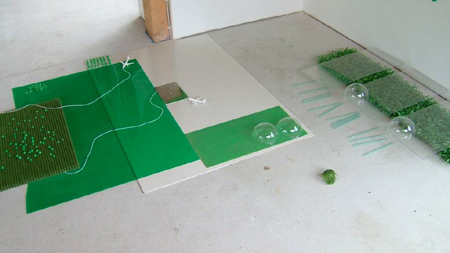 Entering the room on the opposite right hand side, there were green plastic sheets in ball shapes, tubes, capsules, cutting sheets, etc. They looked like casually left scattered. However, by looking carefully, there were a little model airplane on it. The structure reminds me the green earth by looking it over adjusting reduced scale.