You can also enjoy the world’s cuisine. Cooling down my head and body heated up in excitement and by the weather, I had an ice cream with yoghurt and roses at Caucasia cooperation pavilion. 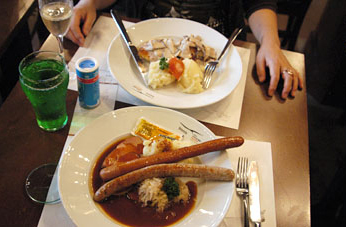 Going around each pavilion absorbedly, it got late so I had lunch at a German Restaurant, which was full of German atomosphere as if it was in the country. I couldn’t stop smiling while having typical German sausage, mashed potatoes and Polk saute mushroom. When I was checking the pictures I took, a German young man said to me in English “Oh, It’s good! Nice!”, then I answered “Danke schoen!”, which are only German words I know. 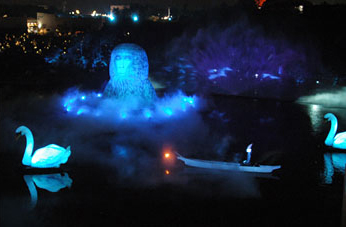 Finally, the climax time came up. There was suitable event at the end of the day, a water performance on the pond. Having a snow monkey (Japanese monkey) as a main character, showplaces and ruins of the world were displayed on the water screen, and babies who bear the next generation and astronauts also appeared. Then, apes of three parent and child generations expressed past, present and feature, and reached to finale… Synthesizer directed the silence, and two swans from the right side and a boat with fire slowly passed on the water in front of the apes. After watching the scene, the apes got relieved faces and disappeared into the water, sinking slowly. Impressed by the performance expressing a Japanese world and feeling of wabi (the beauty to be found in poverty and simplicity), I left the venue.