The OFFF festival 2005 is about to begin and the sun is shining brightly while the doors open; perfect weather for the first visitors to get together at the nice bar terrace in the yard between MACBA and CCCB. These two emblematic buildings are located on the center of Barcelona, which also regularly hosts thousands of visitors in other popular city festivals like Sonar. Some visitors enjoy a small breakfast and coffee as the first queues are formed at the entrance. 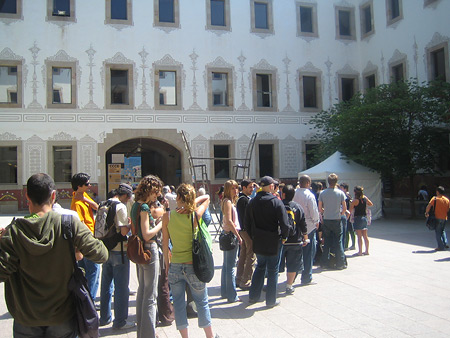 As usual, OFFF offers different spaces: a theater for watching motion graphics and diverse film pieces, a place for chilling out with internet access and a bar, the exhibition space and the big conference hall.

The festival starts with a great lecture. Indeed, probably one of the best ones of the festival. The people of Soda show us the natural evolution of the Soda Constructor as a result of many contributions by the online community. The Soda Zoo is growing rapidly, and the soda race competition aims to test the users’ abilities against the machine. Genetic algorithms are used to generate new creatures that are able to learn from the competition against the creatures created by humans. At the end it is difficult to distinguish between what’s human and artificial since the machine learns from human input, and the users learn by copying and optimizing artificial models. 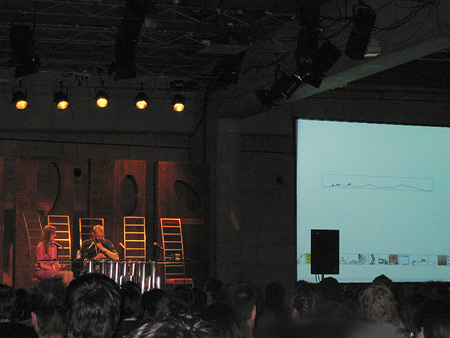 Soda presentation at the conference hall.

Soda also surprises us with a new software piece called Moovl, specially designed to be used on a tablet PC or something similar. Moovl is a drawing environment with some applied physical properties such as weight and friction, and with a real-time audible response. The user learns through experimentation and has the possibility to create hyperlinks between objects and actions generating a complete story-board experience.

After that we have the chance to look at the exhibition pieces. We especially liked the Wire Sculptor from Amit Pitaru, a 3D drawing environment mapped into a frequency matrix (each region of pixels is linked to an audio frequency). 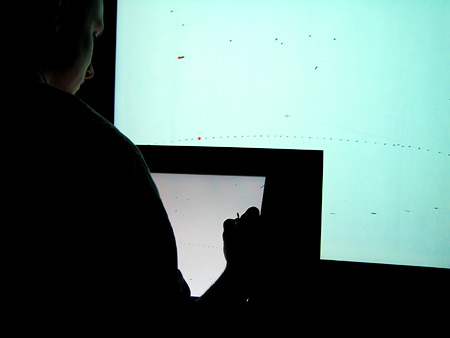 The piece lets the user experiment by drawing, rotating and generating visuals as well as music or noise frequencies. It is also worth mentioning the installation by Danny Brown, a Macromedia Director piece that continuously generates flowers by using a snazzy motion effect. A pleasure for the eye. Next to it, a generative pieces from Jared Tarbell, unfortunately not one of his best. We also have the chance to play with Moovl and RoboType, a software piece letting users draw by using only typographical elements. 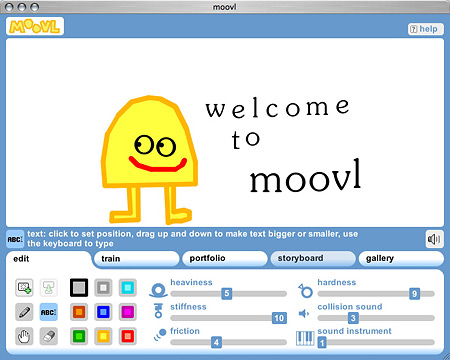 During lunch break we have some fish and sample some of the fabulous menus that Barcelona offers.

We must also mention the great lecture and motion graphics by umeric after which we we reach the day’s climax: Jared Tarbell shows us his generative scripted pieces done in processing and flash MX during his lecture Artifacts of Computation. Simple math is applied several times in an infinite loop where the feedback is the key of the system. 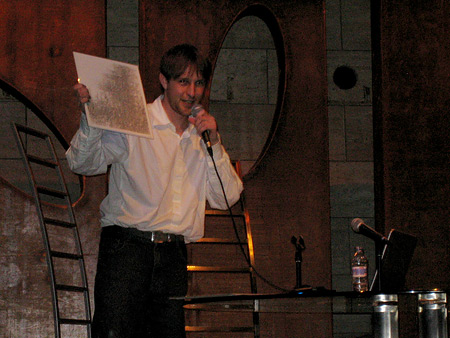 Jared Tarbell giving out some of his artwork prints after his conference.

Jared explains the importance of using feedback (future states depending on past ones). His work simply mesmerizes! The simplicity of computational processes controlled by few rules generates at a certain point in time the beauty of complexity, as in nature. Fibonacci, other numerical series and very basic physical rules let him generate amazing artwork with smooth motion. His combination of talent, friendliness and a permanent smile makes him into one of the biggest successes at the festival. 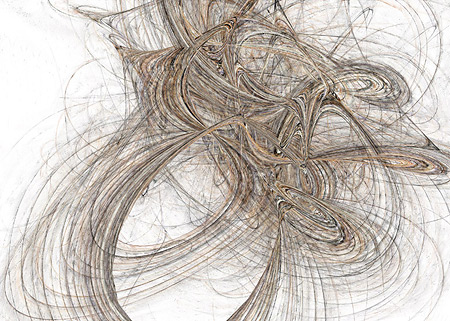 The first day of the festival is concluded by Joshua Davis, a regular speaker at the festival. For the past four years Joshua has been talking about the same things and it’s no different today. Nothing really new if you already have seen him, a lot of the same jokes and comments… But a great new piece: Joshua uses an extruded 3D model. While looking flat (fake 2D) it generates a broken motion when navigating through different content areas by moving within the Y axis.

Joshua Davis’ speech sounds a little too much like marketing than design or art, and we have the impression that he still works with what he calls “the spacebar method”, a generative design process he already presented in 2000. What has Joshua been doing for the last 5 years? Pressing the space bar?

The first session closes at nearly 11 a.m., the perfect dinner time in Barcelona!