On May 12th, 2005, commemorating the sixtieth anniversary of the end of the war in the Federal Republic of Germany, a Holocaust Memorial, in honor of the hundreds of thousands of European Jews that were persecuted and murdered was opened. 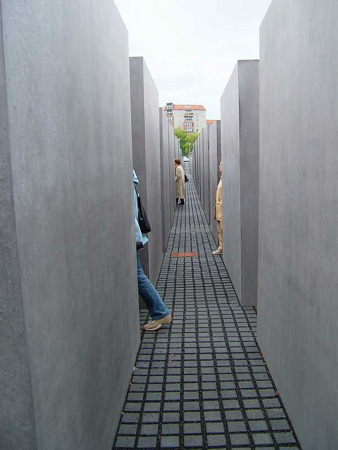 The concept of the memorial started via an appeal of journalist Lea Rosh in 1988. Finally, after numerous discussions and discourse, it opened this year. Guenter Grass and Christa Wolf, well known throughout the world entered their name as supporters of the concept. The Memorial, designed by Peter Eisenman, consists of open space for a multitude of stone monuments and an information center located underneath of the ground. 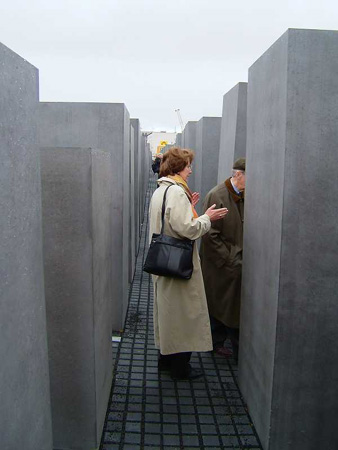 The open space is composed of 2711 stone monuments. It is said that the number was calculated according to the location’s size, and that the number itself does not have any specific meanings. All stones are 0.95 meters by 2.38 meters and made of concrete with a hollow inside. Spaces between each stones are constant, just about the size of a person or a wheelchair can pass through without difficulty. Visitors are able to get in the area from many different points and walk through the space between the stone monuments. The height of the stones located near the open space are below one meter. As one keeps walking further, they gradually increase in height and the tallest ones exceed four meters. 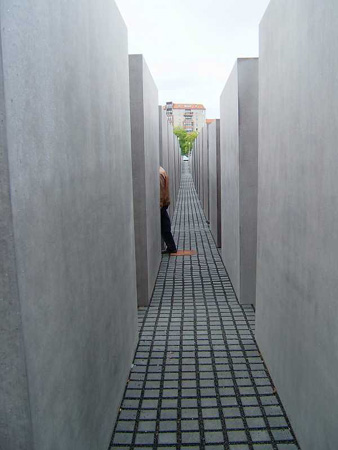 Eventually, only the exit and the sky can be seen as one walks towards the center of the area. The interesting thing is that there are no spots to create shadows. The stones look as if they are standing in a perfect line, in constant order, but actually they lean slightly and have varying heights. The ground is gently sloped. People show up in between the gaps in the stones and then vanish. Sometimes, you may bump up against somebody who is crossing the same time as you. The modeling is very simple and minimal. A structure like this reminds people of tracing history in various ways.