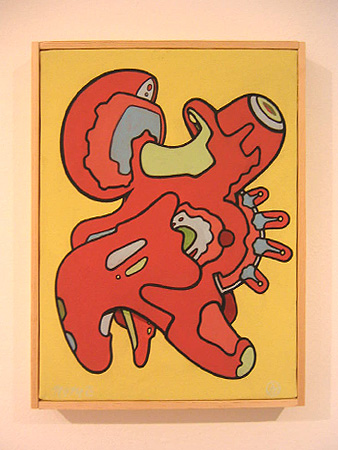 Last Saturday night, the doors of Double Punch (one of the City’s coolest places to buy toys, merchandise and art) were opened for the reception of NoMe: Urban Surrealism. Outside the rain soaked the streets and sidewalks, threatening to melt anyone who attempted to leave their apartments but inside the stores gallery space, warm, bright lights projected down on the work of NoMe Edonna. 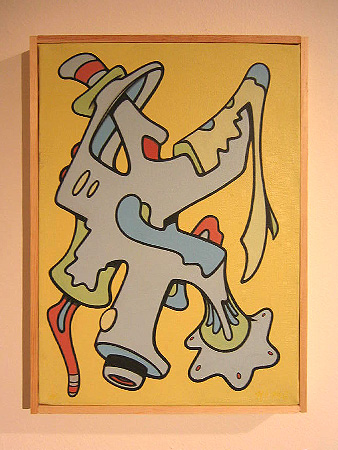 NoMe is a self-taught artist whose education comes from his many years as a grafitti artist in San Francisco and from a fifteen months of traveling and studying in Europe. With this kind of background his influences are as varied as the mediums he chooses to work in. Usually consisting of wood, magazine clippings, and paint, NoMe illustrates Surrealist and Dada-esque figures, pod-like structures and what falls in the blurry area between; this is where you find the core of his vision and work. 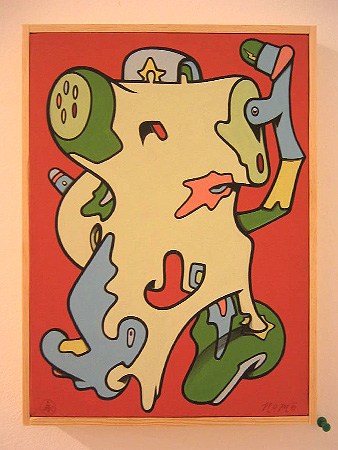 On this particular night, on display was a series of paintings that NoMe created especially for this show and were on sale for no more than $200 – you can’t beat that! In a somewhat assembly-line nature, each painting was one of two sizes (approximately 12″x14″ or “8’x10”), each was painted using a single palette of colors and each depicted a similar machine-like organism. To me, they looked like the houses occupied by the ocean-dwelling “Snorks” in the mid-eighties cartoon of the same name. 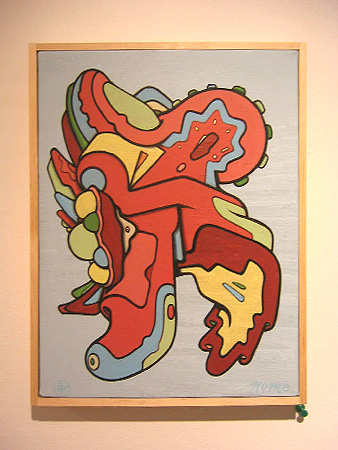 What I really love about NoMe’s imagery are the subtle shapes that hint only slightly at recognizability. It’s almost like trying to see things in clouds; at first glance, a certain shape catches your eye and suddenly you might be looking at a portly being with a candy cane for a tongue and riding rollerskates that look like they’re made of play-doh (or something equally as psychadelic). While this act is entirely subjective, it is a playful and engaging element to his work.

Despite the rain, many decided to brave Mother Nature’s showers and attend the reception of NoMe: Urban Surrealism at Double Punch.