“Shrinking Childhoods” opened in November 2004 on the grounds of Tate Modern. Initially it was a struggle to find it due to bad signposting, but as word got round and the exhibition began to generate interest from the public and the mass media, the original signpost was replaced with a clearer, user-friendly one. 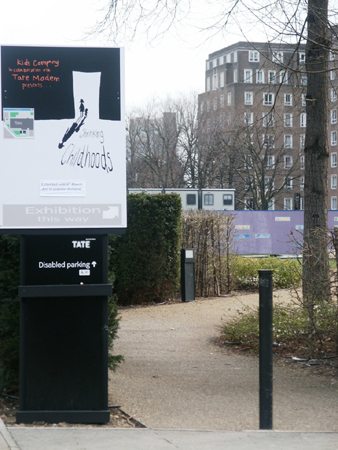 Children abused in the early stages of their life, or those who grew up surrounded by drug addict parents who neglected their responsibility to nurture them, often end up with deep emotional scars and behavioural problems. “Kids Company” is a charity gives support to these vulnerable and isolated children by therapy, counselling, giving advice and practical support such as education and financial means. This exhibition is a result of collaboration with Kids Company and Tate Modern. 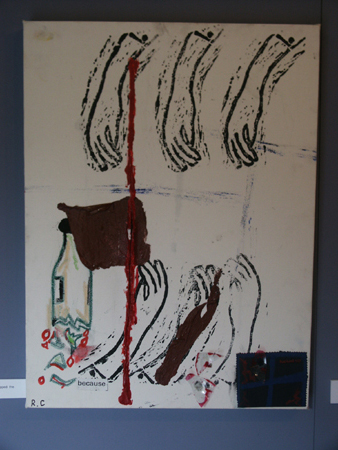 The purple construction represents the children’s living environment. Each exhibition space showcases installation work produced by over one thousand children in UK. 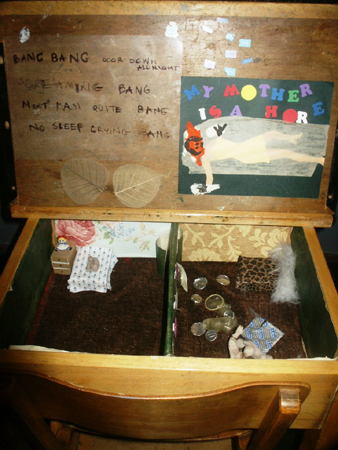 RC was subjected to horrifying abuse as a child. She could not bring herself to talk about it to those around her, and turned to drugs and alcohol to relieve the pain of the memories and recurring fear. Sometimes when it became so much that she could not cope with it at all, she would cut herself.

One of the installations of desks and chairs lined up as if in a classroom. Inside the desk lid, is a child sleeping in foetus position on the bed, while in the adjacent room used and unused condoms scatter the floor. A painting above it reads “MY MOTHER IS A (W)HORE.” 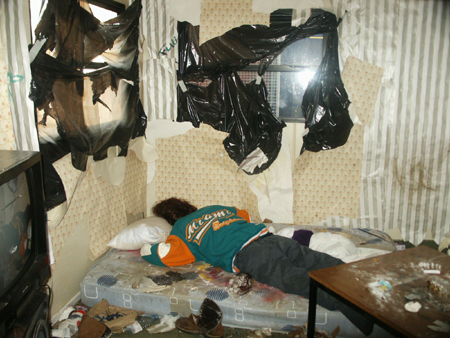 The room is dark and damp, litter on the floor and black plastic bags strewn across the windows. It is shocking, a landscape of a home of a dysfunctional family corrupt by drug abuse. The photo is of a father figure lying face down on the mattress, but in the next photo we see a small child, abandoned in the corner of the room. What sort of emotional growth will this child manage to achieve, living in such dire circumstances? On the wall is a note written by a child reading, “Take it from me it is (sic) coz you might as well say this was my house when I was younger …(text partly omitted)…. Drug ruin lives.”