Amsterdam-based artist Petra Hart, started the Fam.Li five years ago after designing a series of faces and suddenly realizing they were like a big family. By giving them names and characters, they took on a life of their own and she decided to organize an exhibition to see how they would be received. It was an instant success, really capturing people’s imaginations and with the proceeds from the sale of her paintings, Petra was able to donate some money to the Cedarfund in Hong Kong. Her idea has been compared by one Dutch newspaper, to a modern version of Dick Bruna’s ‘Miffy’. 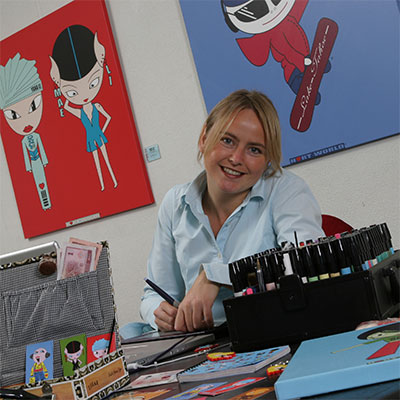 Following the first exhibition, Petra decided to expand on the whole concept, providing her characters with more details (such as bodies) and creating different platforms through which to introduce and share them. The family itself consists of a father, mother, 19 children and a pet. Petra says Fam.Li exists especially for kids without families and so part of the revenue goes to these kind of children. Her ultimate dream is to have a house for homeless children called ‘Hart-World‘. 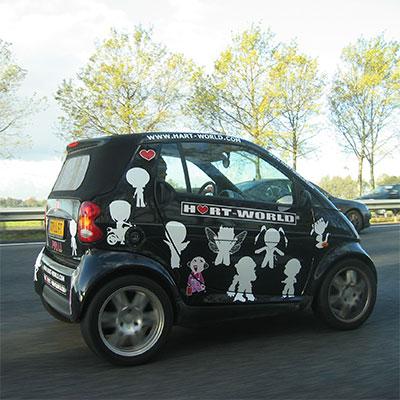 With the addition of a permanent gallery home for the Fam.Li (‘here you can see how they went on ho-Li-day’), Petra’s idea takes on a larger presence and the ever-expanding Friend.Li’s (people who want to become part of Fam.Li and take part in their adventure story-lines) keeps the momentum going. Her most recent exhibition at Sotheby’s will be followed by a forthcoming one at the Pop-Art Gallery in Amsterdam and the list of media used by Petra is impressive – animation, acryl, pictures, booklets, internet, cars, television, newspapers, magazines, fashion and so the list goes on.

For Petra, Fam.Li is her life and, ‘all the homeless children are in my heart’. Her ambitions are to develop a Family.Li animation and also expand on her on-line store which already has regular clients as far away as the US.
I have a feeling we’re going to hear more about this unusual creative idea.