The 8th Japan Media Arts Festival, which promotes wonderful works, took place at Tokyo Metropolitan Museum of Photography in Ebisu. The pieces selected from a large number of media art works, sent from the inside and outside of the country, are exhibited and screened every year. Also, the works at the exhibition hall are open to the public for free, and it provides people with a useful insight into the latest in the media arts.

In the same way as last year, there are four sections of; art, entertainment, animation and manga, which is now recognized all over the world as a part of Japanese culture. From each of these sections selected works are rewarded with the grand prize and the excellence prize. A symposium is also held in which the prizewinners participate. 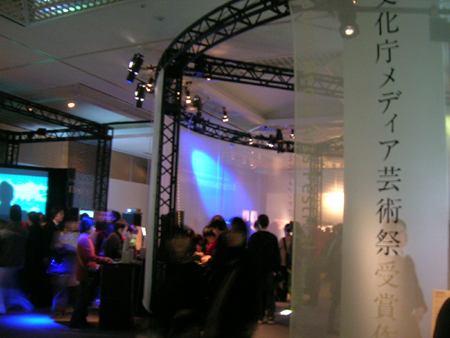 The hall was crowded with a lot of people the day I visited. Even allowing for the fact that it was a holiday, this was still a good indication of the people’s deep interest in recent media arts. Moreover, it was a rare opportunity to see a wide range of age groups from the elderly down to children in such an exhibition place.
I also visited the symposium for the winners of the art section on this day.

The symposium was participated by two artists from ‘Electronic Shadow“, who won the grand prize in the art section for the installation of ‘3 Minutes2’. They were also awarded a prize at one of the biggest European media art festivals, Ars Electronica. A new generation media artist Norimichi Hirakawa, who won the excellence prize in the art section for ‘GLOBAL BURNING’, also participated. They gave a speech explaining the concept of their work and other creations they had produced. 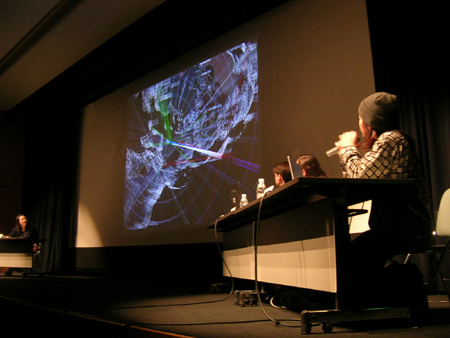 It was especially impressive that Norimich Hirakawa said that he hoped to create conceptual media art works which incorporated real feelings. For example, the appearance of the earth seen from space achieves common recognition in contemporary society even if few people have actually seen it. 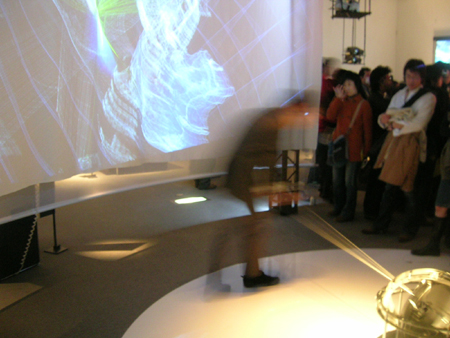 ‘Global Burning’ visualized traveling straight through the earth, from the point of view of Tokyo, by moving a stick with a gyroscope. Controlling the earth grid projected on the screen, viewers could surprisingly feel and confirm that the earth was a sphere and the ground would lead somewhere, which was what we all dreamed of in elementary school.

It could be said that this work showed the concept that he talked about in the symposium. It might also refer to the matter of the reality of virtual reality and the reality of equivalence of reality that occupies one of the critical elements in the media art.