Tokyo Designers Block (TDB) has reached its 5th year and the theme for this year was “1968 Revolution”. This festival questions “what is art?”, “what is design?”, adapting the whole city of Tokyo, where the city keeps multiplying and expanding, as a venue.

For me who hasn’t experienced the time of 1968, the booklet actually didn’t help me get a clear picture of the connection between the theme and art/design. Was I going to find out something by looking through this festival? 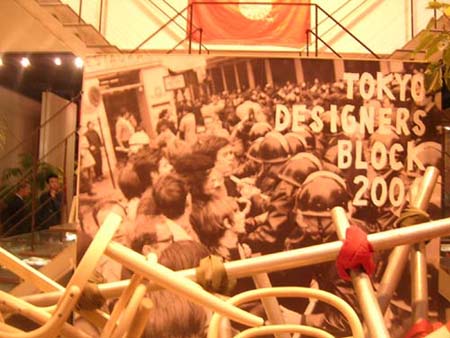 The first place I went was IDEE shop, which was the office of this festival at the same time. This shop is used as one of the main venues of TDB every year. 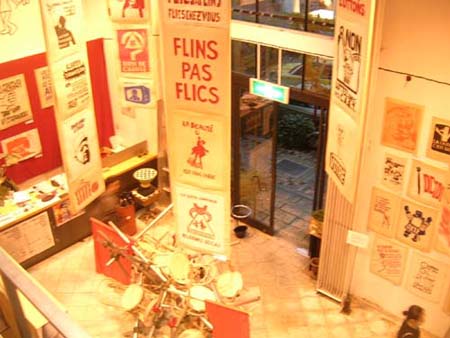 Around the entrance, pictures of the collision between demonstrators and the riot police are printed on the wall and there is an object which combined pipes, chairs and red cloth and it is placed like a barricade. Pictures on the wall are probably from the revolution of May, 1968 in Paris. Around the same time in Japan, there’s also a student movement and the campaign against the Japan-U.S. Security Treaty. The heat of 1968 might have been an universal matter in the world.

On the third floor of the shop, works of Keiichi Tanaami were exhibited in a space that was partitioned off by glass walls. He is an artist who has been creating unique works such as graphic design, movies and animation since the sixties. 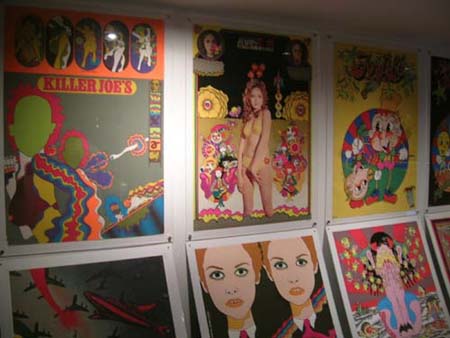 He has been always a leading artist in this field and is the most suitable artist for this year’s theme of TDB. Most of the works are posters of colourful, pop and psychedelic graphics. I felt the heat of the sixties still alive in his works.

If we define the art as a portal to the time, there might be some works which can only be born as a result of that time and I think the power in those works are tremendous. He has lived his life honestly so his works can’t be simply defined as “new” or “old”. Moreover, figures made from his illustration are displayed in the glass case and those creepy but charming and comical figures make for an odd scenery.