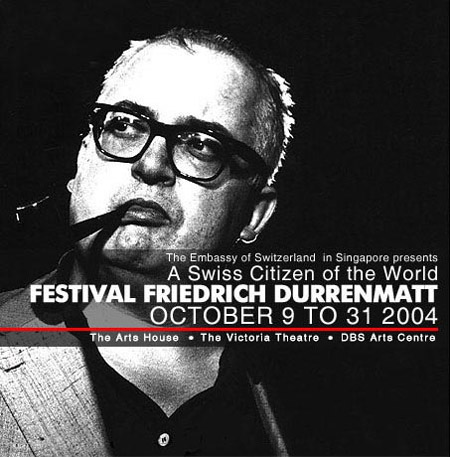 Singapore is a globalize city. Absorbing the culture and influence of both the East and the West. In a country that has little natural resources, she has to set high standards for herself, in order to compete on the global arena. With goals such as meeting the Swiss standard of living, she has pursued her economic goals long enough. The time has come that she pursues a similar discourse culturally.

The Durrenmatt Festival is one such event that pursues beyond the economic. Celebrating the hundred and fifty years of history between Singapore and Switzerland, the years of economic ties and influence that binds the two states is celebrated through a series of cultural explosion.

The “Swiss Citizen of the World,” novelist, playwright, essayist Friedrich Durrenmatt’s lifelong production of work is placed on exhibit in the newly conserved Arts House at the Old Parliament Building. With an array and diverse multi-disciplined festival that takes a look at exhibitions, plays and talks, it creates an in depth look, an intellectual discourse on the realm of this globalize citizen.

On the theatrical stage, plays adapted from Durrenmatt’s work are performed by both Singaporean and foreign arts professionals. The visit of the Tai Tai (“Der Besuch der alten Dame”) takes a local twist on a world classic.

Theatre director and actor from New York, Christopher Martin, takes us through the readings (Sound and Sight) of “The Minotaur” by Friedrich Durrenmatt as a literary exploration. Locals are also featured as an exhibition of the best essays of “Citizen of the World” where the best results of an essay competition on the general topic of “Citizen of the World” features the works of Singaporean and International students.

Even the architect who designed Durrenmatt Centre in Neuchatel, world renowned Mario Botta, was brought in to give a talk at the National University of Singapore about his design and inspiration.

The Durrenmatt Festival is a truly multi-disciplined event that embraces the visual, the audio, the intellectual and the emotional. Culturally, it shows the works on a single man who influenced and changed the world he lived in. A journey to embrace.