Yayoi’s career began with pictures that were influenced by hallucinatory experiences she had in childhood. She has received high international praise for her renowned work with the dot motif and meshes of net proliferated infinitely while staying in New York during the 60s. Yayoi Kusama is one of the best contemporary artists who attracts attention from around the world. The Kusamatrix exhibition, which recently finished in Tokyo is now at Sapporo Art Park. 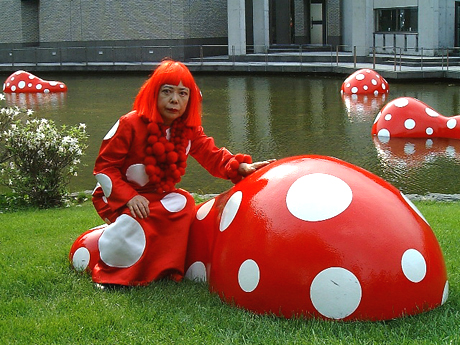 On the Saturday afternoon of the launch day of the exhibition, “Yayoi Kusama’s avant-garde fashion show” was held at the park. Sapporo Art Park is literally a beautiful place rich with nature and huge woods. It also has a museum and some ateliers on site. When you go into the woods, you can find scattered around 20 solid structures with red and white polka dots on the soft green grass and pond, which spread in front of the museum.

In the pond, the structures it had made friends with nature to the extent that division and multiplication were likely to take place there as if it had a life with the appearance which leaves the body to a wind and moves calmly. On the grass, there was a heartwarming scene that children frolicked around the solids. 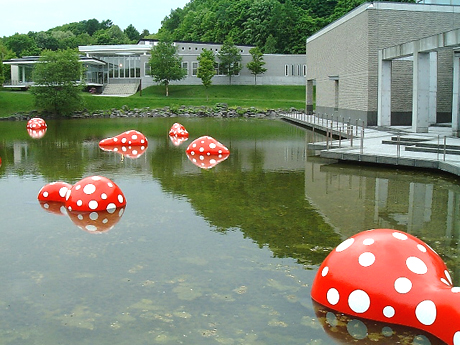 Enjoying such scenery, I was excited about the start of the show. Then, music starts and the models clothed in “works” holding a balloon in their hand begin to march. It’s a spectacle as if it had been carried out on a trip to a wonderful country. The models marched around the front of the garden which spread in front of the art museum and after that Yayoi Kusama, who is petite, came out. I was awestruck from the powerful work that appeared at the end of the marching.