I did however participate in becoming a member of the Evrugo Mental State, by the Barcelona artist Evru. Supposedly formed sometime around 1968, and its philosophies are ‘autocratic and universal’, with its main industry being ‘ironic weapons which kill through pleasure and laughter’ – sounded interesting! I thought it would be fun to pose for one of these photographs, to become ‘digitalised’ and ‘materialised’ into the Evrugo state, so I quashed any feelings of self-consciousness and went through the process of becoming the newest nude member of this strange quasi-mental space. 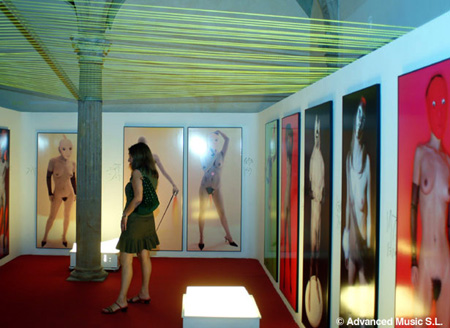 I’ll be waiting for my image to appear on the website sometime soon (so they tell me), and maybe if I’m lucky I’ll get a full scale reproduction of myself and end up in some exhibition somewhere, that is, if I conform to the Evru State’s ideal body form!

I was all ready to set off and see more displays at Sonarama, and then it started pouring with rain, which had been threatening to happen all day. I took cover inside the Sonar By Day complex (along with 20,000 other people) and decided to move downstairs into the safety of the Sonar Hall, meeting up with a friend to watch the last performance of the day and also check out the Record Fair being held next-door.

It was a shame that the last day of the Festival had to end with rain, but it didn’t seem to matter, as a lot of party people kept dancing under the rain in the SonarVillage, while others wandered off into the streets to recharge with some local culinary delights, in anticipation of the extravaganza at the Sonar by Night complex.

Although it was an extensive program, I would have liked to see more immersive types of art installations, where the viewer becomes a part of the experience, such as work based on the movement of people within a space – technological systems reacting to the viewer. There was one such piece (clearly sponsored by Motorola) set up in a thoroughfare between venues, but it would have been good if this idea had been taken a bit further, to integrate the art component into the whole experience of being at the Festival. 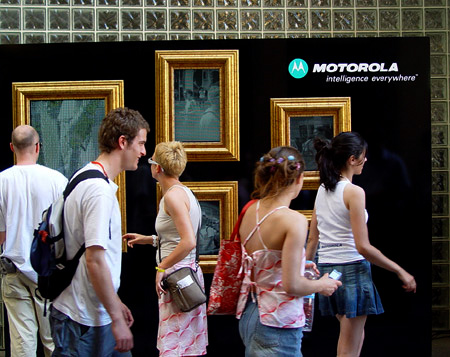 LED ‘Paintings’, where cameras input the viewer’s image inside the frame

And if you weren’t on the ball, you might have missed a lot of the art. To get a seat in the Sonar A La Carte required waiting around for a long time until someone decided to not-so-elegantly lift themselves out of their comfortable integrated couch/computer system. They should have had some authoritative figure standing in uniform with an electric shock device to let people know when their time on the comfortable computer couch was up.

These minor issues aside, The Sonar Festival was an enlightening visual experience, which offered a huge variety of some of the best examples of digital art creation. With conferences and forums, there were opportunities for artists and professionals to meet and discuss current issues related to their work, and a chance for the viewer to gain a more detailed insight into the nature of the artists’ work practices. If you didn’t have time to catch any of the audiovisual presentations, you could always see examples of innovative digital artwork on video screens while dancing with ten thousand other people to your favourite DJ, perhaps with not the same amount of focus but certainly a similar level of appreciation.

For me, the Festival highlighted the importance of pushing technological tools in different directions, and above all, not being controlled by these tools in the pursuit for the perfect expression of our imaginations. It is proof that Sonar – as an organization concerned with cutting edge art, music, and technology – has firmly cemented its reputation as one of the largest and most progressive festivals of its kind, while not compromising on innovation or experimentation.