As mesmerizing as they are, once the novelty of the sand wears off, the sculptures take a different perspective. Some simply become beautiful works of art, whilst others seem to unfortunately become kitsch monuments. 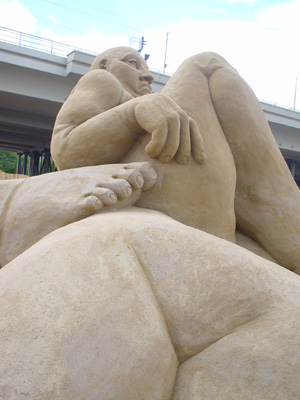 Most impressive were the serenity and strength expressed in Peter Busch Jensen’s “Wind”, the sheer artistic skill in Pavel Zadanyuk’s “Surrealistische Phantasie”, the gorgeous curves of Anique Kuizeng’s “Moddervet” figures, and a personal favourite, the comical facial expressions of Simo Abdessamad Baallal’s camels. In the end, the prizes went to Kuizeng and Jensen for the Artist’s trophy and 2nd German Sand Sculpture Prize respectively, with the Audience Prize to be announced at a later date, when the votes of the visiting public have been collected. 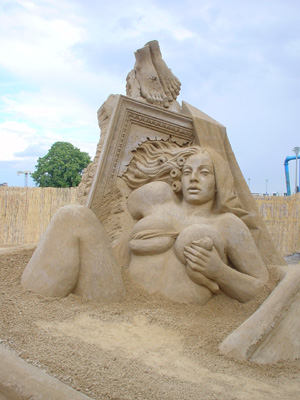 Sand sculpture is thought to have been pioneered sometime in the late 70s, and for most of the carvers – many who work mainly as stage designers or restorers, or with other material such as ice or snow – it offers and exciting alternative. But perhaps this art form will be wider spread in the near future. Already carvers such as Pavel Zadanyuk and Sandsation organiser Martin Tulinius are in demand internationally, and Japan has just held the 1st Japanese World Sand Sculpting Championship. It’s typical of Berlin to pick up on these niches and make them into amusing, inviting events. Lets see what follows….