90sqm has firmly established itself as a place to see both emerging and established creative talent from a wide range of backgrounds and influences. This month sees another exhibition from across the Atlantic, this time in the form of artist, Joker aka Jerry Inscoe. 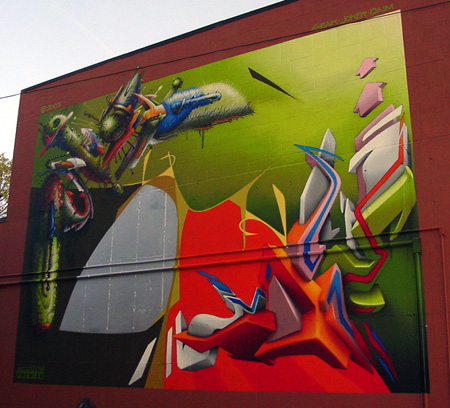 Born in Washington DC, Joker started writing graffiti in the summer of 1985 and is currently living in the Northwest, but to define him only by his original love would be a great disservice. At the age of 34, Joker is a well-established graphic artist with an impressive list of achievements which not only include countless exhibitions in both the US and Europe but also individual assignments such as snowboard design for Burton, design work included in the original Nike Presto launch campaign and his on-going passion with tattoo design. Artists who have collaborated with Joker include Cody Hudson, Dalek, Giant and Jim Darling. 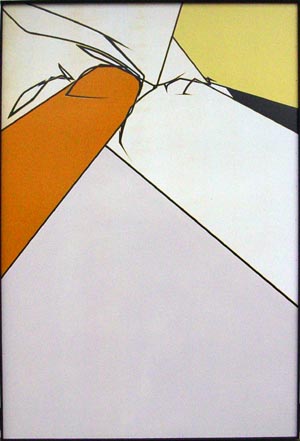 This is Joker’s first show in Amsterdam and he’s chosen to mainly exhibit in his strongest medium, pen and ink but there are some digital prints as well. He’s turned his attention to the computer and has only really begun to explore its potential within the last year or so. “So right now that’s taking up a lot of my time because it’s something new and in a sense like starting fresh. I’m showing a few digital prints at this exhibit but I know they’re not where they could be as far as skill level.”

The strong graphical lines of his paintings have also appeared on wood, a medium he says is currently his favourite, and there will be a few examples also exhibited. “I like having the wood grain show through and leaving some of it exposed. That negative to positive effect it leaves is pleasing to me.”

Exhibiting in a shop seems to be a growing trend as art makes itself more accessible to a new public. This cross-over factor certainly seems to have demystified ‘exhibitions’ and provided a much needed inspiration injection to a public bored with the traditional venues of creative expression. For Joker, the accessibility becomes even more of an important issue, “I like showing in shops… the average customer may be more familiar with writing but not necessarily the artist. And when you have art like mine that borders on graphics and graffiti, you’re also opening up your customer base… I want to reach more than just writers.”

You can see Joker’s work at 90sqm until the end of July otherwise your next chance is Boston (Jan 2005) where Joker has a group show with several members of the artists collectives Transcend and Bloodclot.