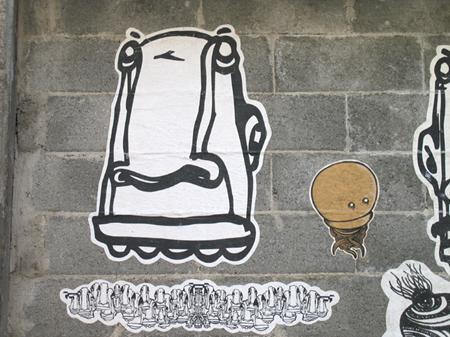 “Being a graffiti writer is about taking the chances and shit, taking the risks, taking like all the arguments from the police, from your own mom, you know from your friends and shit. You know, you’ve got to take all that bullshit ”aahh, you’re vandalizing all those trains”. (…)
How can you call people that hang out windows and watch trains writers, man? You’ve gotta write, you’ve gotta do the action, you’ve gotta go out there and wreck up, you’ve gotta go out and paint and be called an outlaw at the same time.”
– Lee Quinones in Charlie Ahearn’s ‘Wild Style’

Hip Hop hasn’t ever had an easy time in Italy. One could point out that it’s presence has spreaded more through branded street styled wear, that has become popular in these last years, than US rap, that hardly ever makes it to the mainstream because of the language barrier. There’s been an Italian rap scene for quite a while but it’s rarely reached the hights of the US imports (except some classic underground joints from Isola Posse All Star or Onda Rossa Posse, to mention a couple). In all this, graffiti happens to be the most popular and practised of the disciplines within the italian Hip-Hop scene, and it has spreaded across the country. And in some cases beyond Hip-Hop.

As in many other cities, if you cross the streets of Milan, from the suburbs to the center, you’ll notice the difference: from the decadence of the outskirts to the more elegant and trendy central streets, filled with fashion showrooms and high street megastores. Along this trip, one thing that you’ll probably notice is that Milan is home to one of largest graffiti comunities you’ve probably ever seen; and you’ll have that impression because the whole city has been bombed by writers. Tags, aerosol pieces, stencils, stickers and posters are literally everywhere. The city’s streets have been claimed and now seem to belong to this community, a bridge hardly get’s built and it’s already tagged before the final touches. You could almost cross the city following certain tags: I live in the southern part of Milan and the same writers tag my area and other distant districts across the city. Graffiti runs along the city’s veins, from the heart to the terminations.

The amount of styles and references are mindbending to say the least, with different generations working in the same moment, from the old school writers to the younger generations, many of whom seem to be moving towards posters and stickers.
An amazing aspect of the graffiti scene in Milan is that you can easily step into the works of many foreign writers, that live outside Italy, next to the local talents. Most of all you can see and witness the way these artists work and collaborate, the way many things have changed from the oldschool. 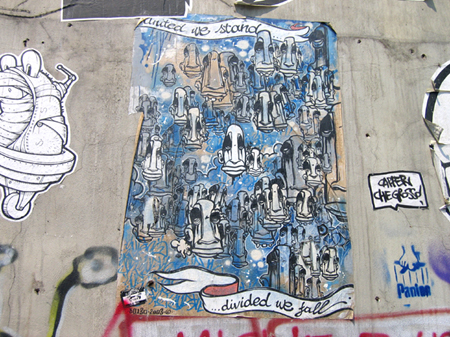 As Bo130 points out, today the idea of becoming the king is somehow changing to a more open attitude towards fellow writers. And it’s not about having your name everywhere, bombing the whole city but more a matter of having your area, your exhibition turf (street gallery is a definition I would avoid using, as every other definition that involves the use of the word ‘street’), where you can work and collaborate, invite other writers, and ultimetly organize. That is another point: these writers have claimed the streets and now are also using them in creative terms, not simply bombing them with tags. 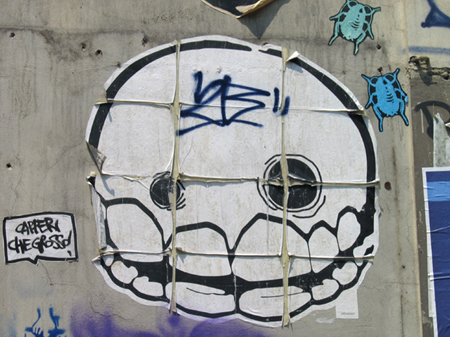 Microbo also points out some examples of positive and negative interaction with pedestrians, to underline the fact that graffiti is an expression also made by it’s context. And that streets are spaces where people live their lives, where everyone goes, without distinctions.

Another interesting aspect of the work of many writers is how conscious their styles are and how aware they are towards contemporary design. There’s a compendium of possibilities and formal solutions, even within the apparently restrictive nature of stencils and low cost, one or two colour stickers.
We could easily extend the compendium to the actual urban landscape and to the use of it’s elements. I still find suprising the apparently casual layouts made with a bunch of different stickers and various overlayed tags on a private property sign.

There also is a compression of languages, many different ideas and styles absorbed from the wide range of trends within the ever expanding design industry. Stretching from comicbook culture to the art toy / character design fever that’s been crossing the contemporary design scene for quite a while, many writers also design websites or print projects. And they seem to feed their graffiti work with skills explored in their illustrator and designer alter egos. 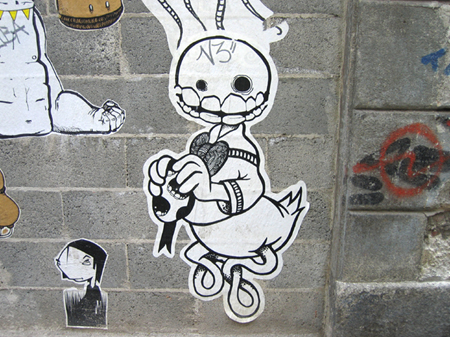 Bo130 and Microbo are two designers and illustrators that live and work in Milan (or ‘doodlers’ as they suggest). They happen to have some of the most interesting pieces among the ones spotted around the city and both have distinctive, iconic styles that stand out immediately. I’ve been seeing their work for quite a long while and I must admit they are among the most interesting projects I’ve seen in Milan. Local traditional graphic designers should seriously take note.

Bo130 and Microbo also happen to be great people, with an extremely positive way of conceiving collaboration and open sourced ideas expressed through graffiti. As they both point out, back in the days they used to me more paranoid about precision and about delivering pieces that were precisely painted while now it’s more about interaction, about working together and making more complex works with the integration of many different styles, co-existing on the same surface and within the same composition. It’s more about speaking out as a culture and less as the voice of an individual battle.

Their work spreads from hip-hop to a more psychedelic and surreal dimension. The language sometimes seems to be as broad as an Anti-Pop Consortium lyric, hyperbolic and complex as the hottest burner. And there are plenty of other analogies to spot out, from works that recall Gerald Scarfe’s dark and humorous depictions of a cruel and submissive future, to the odd and surreal world of Charles Burns. It’s hip hop in it’s most creative sense, an ever-absorbing expression of the many different codes within the contemporary reality and the media; intricate as one of Microbo’s Doodles or Noodles, obsessively present as Bo130’s zombie armies. Bo130 thinks of them as aliens, the way he feels in this city and in this life. His characters portrait the multiethnical nature of the urban reality, they all seem the same but are slightly different in the detail. ‘Diversity our unifying heritage’ is written in many of his works.

In a country where design isn’t exactly living it’s strongest season, it’s good to see that there are talents that make up for a certain creative boredom that seems to appear now and then around here.

I’d like to thank both Microbo and Bo130 for their precious information and their generosity, not to forget the great chat we had a hot afternoon in Milan.