For two weeks, four strangers put their lives on show to the whole of Singapore. Sounds familiar? Indeed, it is almost like the Truman show, just without the tear jerking scenes. Daily activities ranging from sleeping, shaving, eating were all put on display on the exterior of Raffles City shopping mall as part of their attention grabbing performance since their previous installation entitled “Blue Boys” in 2000. 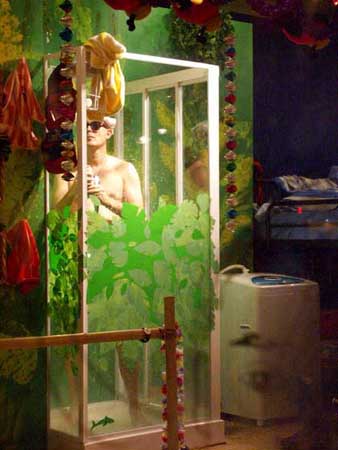 What a sight it is to catch these foursome in action for twenty-four hours a day. Sealed in a converted window display for fifteen days, the retrofitted space had all the modern day comforts of home. From a computer, beds, kitchen to the tantalizing see-through shower cubicle where stickers of leaves were pasted on all the right locations [to the dismal of female fans]. 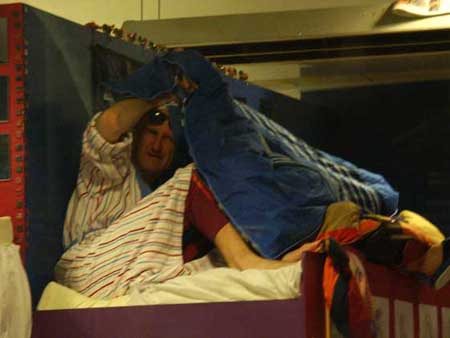 Winner of the Age Award at the Melbourne Festival and the Gentenar Award in Gent, Belgium as the best show presented, Urban Dream Capsule was part of the Singapore Arts Festival. Part of the outreach program to make the arts more accessible to the public and non-theatre going crowd. 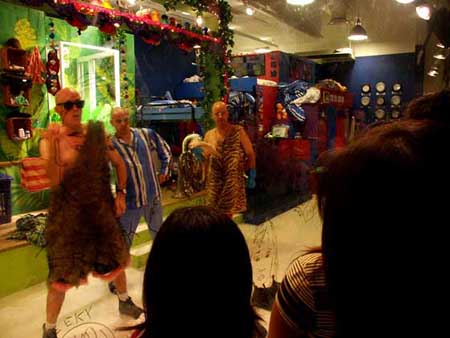 Accessible it was as it took Singapore by storm, becoming the talk of the town. With crazy antics, spontaneously dancing to the music, hugging stuff toys to donning humorous cave man costumes, these four did not fail to entertain. Curious passers-by waved and were often teased in response. Armed with a white board to communicate with the audience through the glass, people’s food, clothes and hairstyles became topics of these silent discussions.