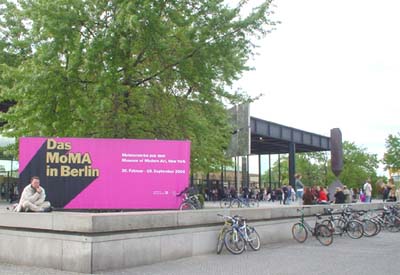 Since the end of February, a strange phenomenon can be witnessed in a corner of Berlin – a continuous line of people circling themselves around a glass building from early morning to late at night. In this city where crowds are rare and streets can sometimes be so empty you wonder if time has stopped and left you in an alternative world, to see a que (“schlange” in German – literally, a snake) somewhere other than town hall offices and cheap supermarkets can be quite a bizarre experience in itself. So what calls for such behavior? The bright pink sign gives it away: Das MoMA in Berlin. 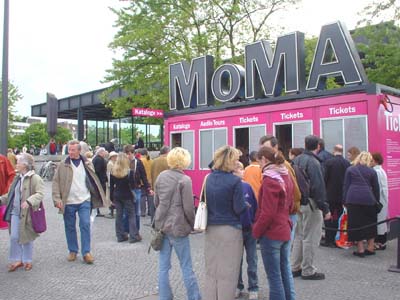 Extensive renovations and expansion taking place at the Museum of Modern Art, New York, has effectively freed much of the most famous art collection in the world to travel abroad. More than 200 of these masterpieces have found their temporary home here in Berlin, who’s museums and progressive art inspired Alfred H. Barr, MoMA’s founding director,in the 1920s in his vision of MoMA’s first collection. 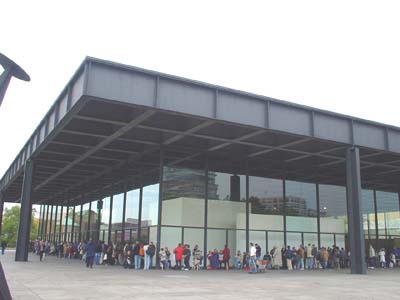 Housing this collection is none other than Mies van der Rohe’s Neue Nationalgalerie, the epitome of glass structures and in its day the largest suspended steel construction in Europe. The historical, personal (Barr originally wanted the Bauhaus architect to design his museum in Manhattan) and aesthetic fusion of Modernist art and architecture is impressive and the masterpieces are breathtaking.