The question then remains, “What is Berlin, right now?”

This is not so much answered as explored in the stacks of magazines displayed in Martin-Gropius Bau, all reporting on Berlin as their special feature. The curiosity lies in the different identities each editor seems to have decided to dress the city in. 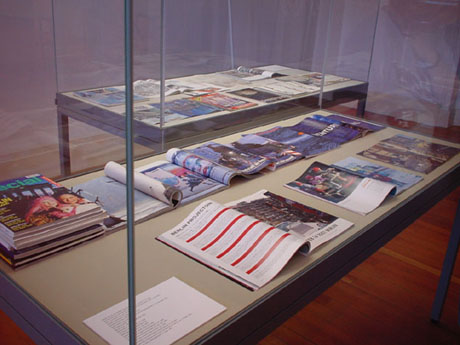 To some, Berlin represents the spirit of modern architecture with its clean glass and steel buildings and un-used masses of offices space; for others it is one the few remaining avant-guard cities offering yet uncorrupted alternative culture; for others still, it has the potential to become the new capital of Europe, shifting economic activity eastwards. All these angles are presented in the glossy pages through photos and imagery, or, from the point of view of many of the works presented here, stereotyping. Aura Rosenberg’s faux Siegessaeule could be an ironic take on this, and was actually quite amusing in the context. 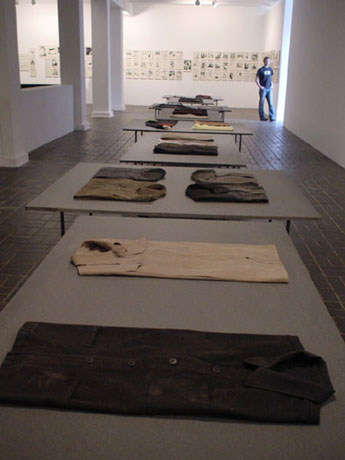 Fashion and clothes were also abundant, from Bojan Sacevic’s “workers’ favorite clothes worn while s/he worked” – neatly folded clothes complete with dirt and grime – to Regina Moeller of the Fashion and Scene hub’s informatively clothed mannequins, to the weak “a room of one’s own”. 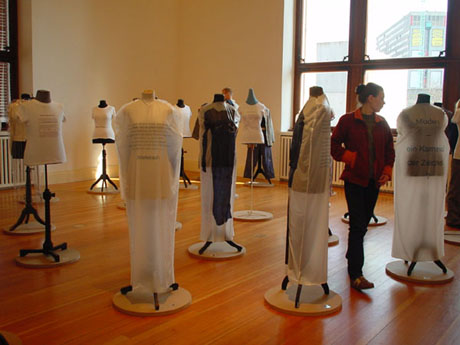 The Sonic Scapes’s hub made a strong impression, featuring Mika Taanila and Erkki Kurenniemi’s collaborative work and Maria Bustnes’ “the girl band project: chilimango”, but on the whole, like many big shows, BB3 was uneven. That is not to say though, that it wasn’t interesting, because anytime a city as complex and symbolic as Berlin is dissected and examined, a few thoughts will inevitably be aroused, and a bigger world than one’s own will suddenly be present.