Chisato Shinya, a Sapporo based illustrator who did the Shift cover design for the March issue, held an exhibition called “Imagine Story” at Soso in March. In this exhibition, she created a kind of picture book with only illustrations , removing words from the story which she has so far kept in her mind. It enables you to be the storyteller, crafting your own story. In the opening event, inviting visual creator Kimiyoshi Futori and sound creator Kentaro Hamasato as guests, they presented a fantastic night. 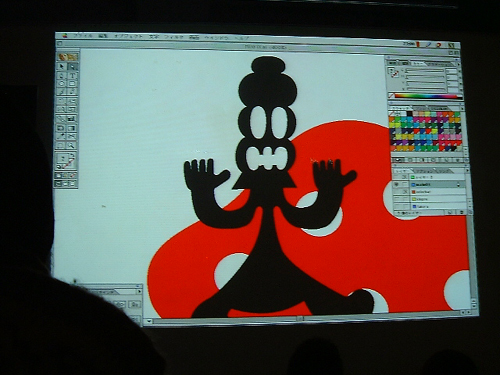 The first half of the session was a sound and visual performance by Kentaro Hamasato from SAL magazine/Nipponia Electronica. 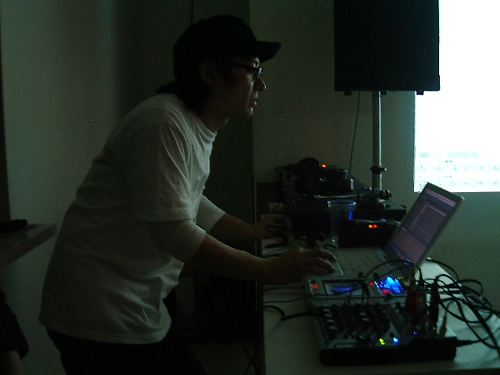 Do you know that demonstration records used to be attached to stereo speakers to show how the speakers worked? (It might only be in Japan.) Based on this idea, he demonstrated the characteristic of speakers by humorously mixing his sound and the movie. The mixture he created was very fresh and interesting: the voice which explains the mechanism used was like that of a veteran newscaster of a formal TV programme, the sound was heavy beat electronica and the movie depicted a man wearing thick frame glasses and a suit dancing excitedly. Moreover, a collage of opening short movies of news programmes and his electronic sound was also interesting. If you see the movie itself, you might not care about it but it looks different with his magic on top. Enjoying his performance, I suspected he might always see things like this performance in his head. 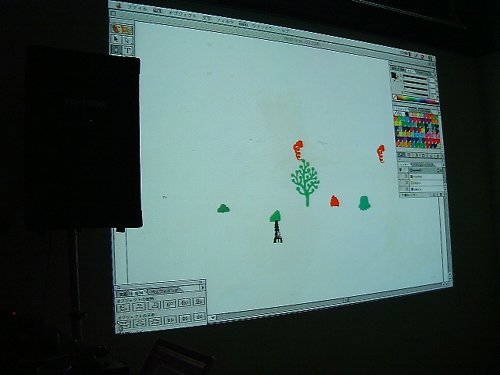 The second half of the party was a collaboration between the three of them. Kimiyoshi Futori is a visual creator who works in Tokyo. He has also had an exhibition at Soso Cafe. In this party, he and Chisato performed a live drawing performance using two macs and a projector. Each of them created their work in real time and the whole process was projected on a screen. Kentaro also joined to put sound effects onto their creation.