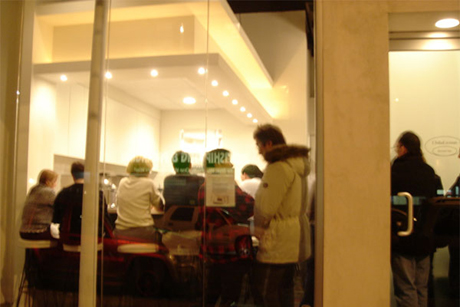 There is something intriguing and peculiar about a phrase “dessert design”. It’s not a phrase that you come across everyday. Being a designer myself, it definitely intrigued me the first time when I encountered these two words I hadn’t seen next to each other before.

ChikaLicious is a “dessert bar” – another combination of words that is somewhat unique – that opened in New York City sometime in 2003. Ever since it opened its door, this dessert bar, with seating for a mere 20 people or so, is steadily gaining popularity. If you pay a visit there any night, particularly on weekends, be prepared to wait for a good 20 – 30 minutes. Just to eat dessert. 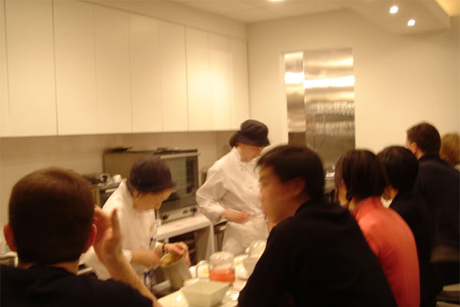 ChikaLicious, named after Chika Tillman – one of the two owners of this dessert bar, specializes in serving dessert and dessert only. It is a “3-course” prix fixe menu, which includes an amuse (kind of like an appetizer of dessert), dessert of your choice (which can be considered the main course), and assorted petit fours (and this would be the dessert, I guess, in a regular restaurant). They also recommend a select list of wines to go along with the dessert. The owners of this bar take dessert very seriously, but with a touch of fun and entertainment.

The space of the bar is centered around an open kitchen where the two chefs (also the owners) work in front of customers’ eyes. There is something very intrinsically Japanese about an open bar concept. Much like sushi restaurants, the two chefs carefully and masterfully craft their creations for the customers who will eat them right after they are created. Kind of ironic but that’s destiny. 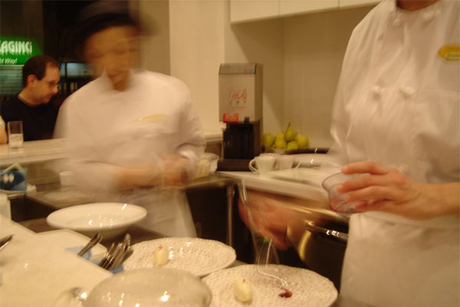 What interested me about this dessert bar was the concept of “dessert design” in the first place. Having visited the bar, I was thoroughly impressed not only by their main creation of their craft – dessert – but also the overall aesthetics that they have extended to the space in which they work. It’s very pure and sophisticated – much the same way their dessert is created and presented. Perhaps they could use some of your help with their website design 🙂