El Colectivo de Julian is one of our local examples of what we call music now. Their first album, “Colegiales Express”, talks by itself. It has a clearly argentine voice which surely expresses a BA way of thinking. Maybe it’s not the only way here in the big city, but it is one we can relate to. The album is a mixture of the contemporary influence of our urban reality and some self referring thoughts of the composer and creator of the group, Julian Massaldi.

How was the band born?

It was born from some themes that I had composed, and I asked my former bands partners to participate. At first we played at birthdays and then we organized concerts and I began seeing myself as a singer. Before, I played the bass, and it protected me from the outside. I wanted to try the world and get out of that protection. So the first live performance was at a friend’s house, who organized a party and created a stage for some bands to play, all friends of hers. It was a cold spring and so we began playing together with the rest of the band. In the year 2000, we had a debut in a place located at San Telmo. The people was satisfied with the show. 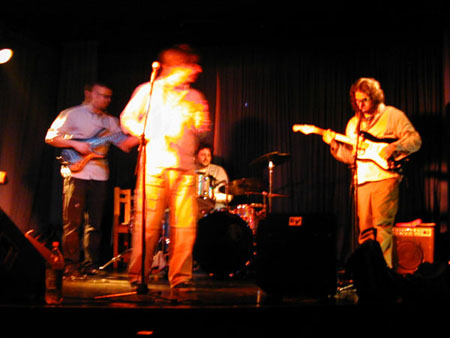 Well, that’s a contradictory name. The original idea was that each concert was a mixture of things. The word “colectivo” has a double sense in Spanish. It means “bus”, the transportation, and “collective”, a group of people standing by a common goal. I find the bus to be an inspiring place, I spend a lot of time in buses where I think of lyrics, melodies, covers and stuff. It’s a meditation place. Also, I wanted to add more things to the performances, but it’s a bit complicated. I never liked the typical rock concert with a stage and some musicians who play songs only known by them, an awkward silence fills the space between the songs, then their friends ask for more, and they return. When the concert is over, people wave the musicians goodbye and then everybody leaves. I don’t like that, it leaves you empty. I don’t like the division between musicians and people, and want it to be more than an auditory thing, I want it to be visual. It’s a live concert, not TV. We make little performances, like wearing light blue bus shirts, or mixing with the audience and dancing with them, we sing without microphone, we want to break through with the idea of passiveness.

How would you define the musical genre of the band? Is it rock?

I try not to. I think rock is comfortable, but I’m not interested. Rock strength is easy, but I like variations, cause you get to miss them with time. I like songs with variations. 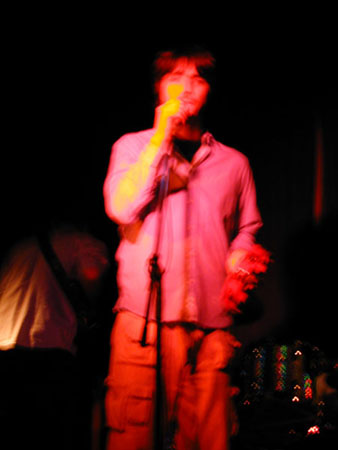 I like to listen to the record on my Discman, while I’m on the bus. Listening to that music changes my state of mind, it gets into my mood and suddenly I feel hopeful and relaxed. It chills me out. And I like it. An optimistic groove enlightens my soul. My ears are open to a different sound: life.