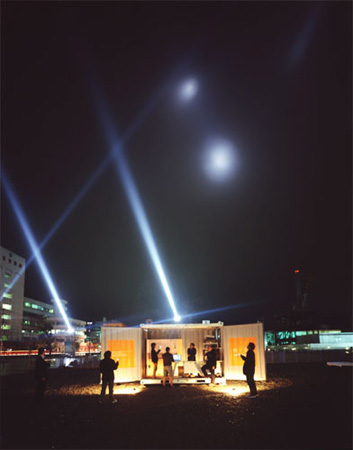 “This project asks questions about the difficulty of telecommunication brought on by technology,” says Lozano-Hemmer, and indeed the system doesn’t allow for smooth conversation. The translation software announces silly results, and someone other than the intended recipient can intercept the messages. What could be taken as a cynical examining of globalization, this inefficient way of communication complete with mistakes and differences, was funnily enough at harmony with the slow tempo of Yamaguchi. Hopes of the future, friends and lovers, best wishes to families. The messages were overwhelmingly about love and peace. Would it be too hasty to detect a sense of hope in the public sky, taken over by messages of peace? 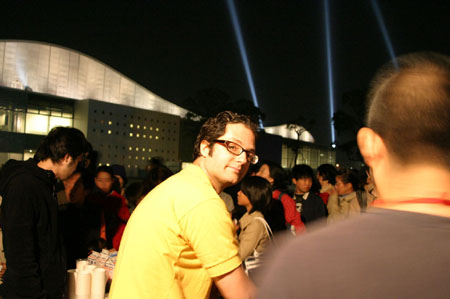 November 25th, 6 p.m. There are no more lights. Yamaguchi regains its usual night sky and there are no tracks of any activity left. This is Lozano-Hemmer’s work. Changing the audience’s conscious at a point, but not leaving a trace. Instead, it suspends itself into our memories and fills the images of a new city, and our imaginations.

*Rafael Lozano-Hemmer will be participating in fete des lumieres, Lyon, France, from December 3rd to 10th.
*YCAM will be holding “Media Sockets” In the public space of the center until December 28th, featuring 6 groups of national and International artists.
*A 3D simulation of Amodal Suspension can be experienced on amodal.net.