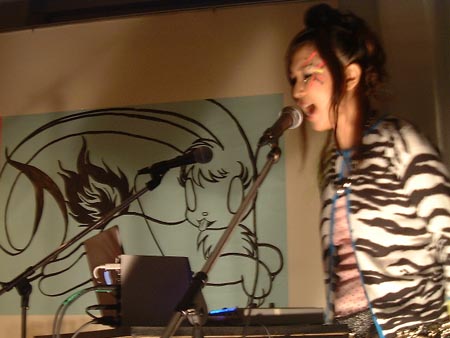 Around The Analog Girl’s left eye, solid and colourful beads were placed giving her a mysterious atmosphere. Her sound was impressive with the noise and heavy beats controlled in real time. Using an effect called a Kaoss Pad she altered her sound by sliding her finger across the pad’s surface. The audience was captivated by her sound which was described as Bjork-meets-Yoko Ono. 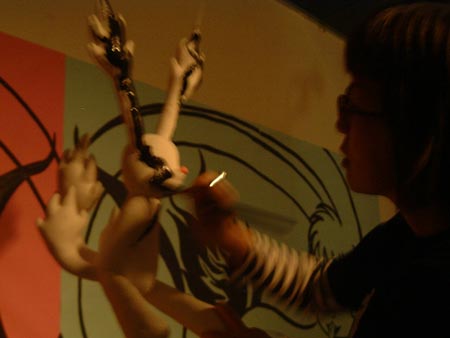 While the audience’s excitement was still hot, Keiko’s second performance started. She poured colours quickly into plastic cups and started painting the pure white stuffed animals. Dynamically, powerfully and speedily, several colours were layered on them. It seemed that she was trying to realise her complete image in her mind, keeping the brushes and drier moving with an intense amount of concentration. It looked like she was giving life to them just like she had with the bambis. The audience’s eyes were glued to her. 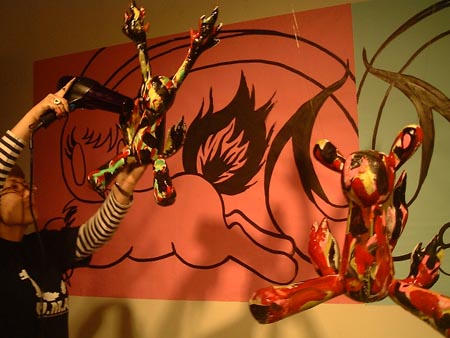 Gradually, the pure white animals turned into layered vividly coloured creatures. Just when most of the people thought that it was finished, she took an ice pick in her hand and pierced animals fearlessly.

Nobody expected that. Most of the audiences stared in astonishment. Then, she pulled cotton up from animal’s body with scissors and her hand. Finally, she attached eyes to their ears and feet. The placement was also unexpected. At this point we figured her performance was over at which point there was a big applause from the audience. Her face changed from being strained due to concentrating on her work to a smile.