Have you ever thought about what it might be like to live with all your friends in one big house? Or what it would feel like if your hobby was your living? Well, DJ Edzon could well be living the dream.

A genuine Amsterdammer, Edzon is best known as the face of Fat Beats – the city’s legendary hip-hop music store. In addition, his spinning skills have sent him worldwide playing in places such as Germany, Czech Republic, London and the US, to name a few. Back home, he continues to play regularly at hip-hop bar, De Duivel, presents a regular Thursday night radio show Hip Hop 120 on KinkFM and finally, produces some of the best mix tapes in Europe. 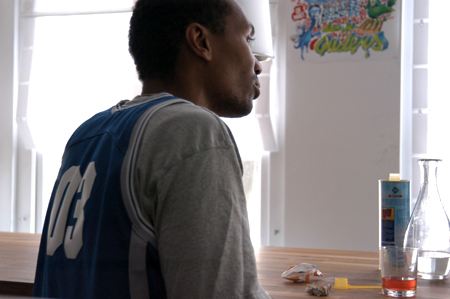 And yes, Edzon really does own a huge, beautiful building a stone’s throw from Centraal Station. “Well, we have a total of six apartments here and myself, my wife and little girl live in the main one. The rest we rent out to our friends which is great. It means we’re like one big family, man.” At the back of the house is the garden with the rest of the apartments tucked away to one side. As it’s a hot day, all the windows are open and from our position up top, we’re able to see snatches of vinyl and sneaker collections in his friends’ windows. (Apparently their summer BBQs are quite an event.) 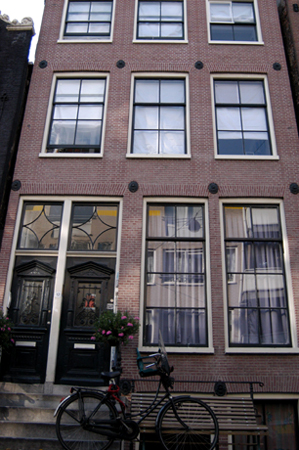 “Everything I do is about music. All my hobbies – and now I make money and travel with it. One big dream. Look at me now – kid, beautiful wife, big house and doing this interview right now. I’m this guy with two arms and two legs. People are like, “Here’s this 31 year old dude. He’s black and I like his records. I’m gonna pay money to see him perform.” It’s crazy! I couldn’t imagine doing this at 16 or 20.” 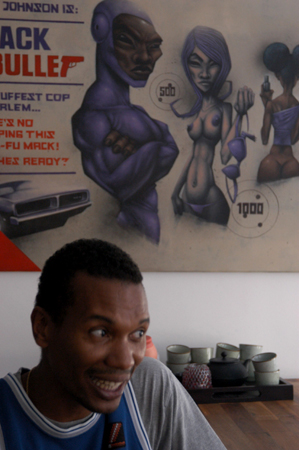 Edzon was born in east Amsterdam where he grew up with his Surinamise parents although from an early age, he spent time in all parts of the city. “As a teenager, I used to hang out in the Jordaan and that was great, different people and different languages.” It was the late 80’s and the Amsterdam hip-hop scene was about to blow-up, “I was like any teenager at that time, I got involved in everything. We danced, did beatbox, spray-canned. There was no division and no pre-determined path. Everyone did everything. We took a lot of inspiration from London.” By the early 90’s however, Edzon was developing a name with his spinning and mix-tapes. “I started by playing every Saturday at this clothing store, Vibes. They had a turntable deck and I claimed it as my own. I must have done OK because after that, Clyde from Vibes hooked me up with De Duivel. I started spinning there, got a regular night and from then it blew-up.” His first mixtape was picked up by cult Dutch radio show, Villa65 Dutch Masters. “It used to be the best rap radio show. There was just this chemistry between the hosts. Everyone listened to it.”