In the inner side of the hall, five works by Crispin Jones were exhibited. The first, “Social mobiles”, are cellular phones that make people anxious in various meanings and designed by collaboration with IDEO. Although they were in a glass case and out of reach, a humorous video describing scenarios was beside them. 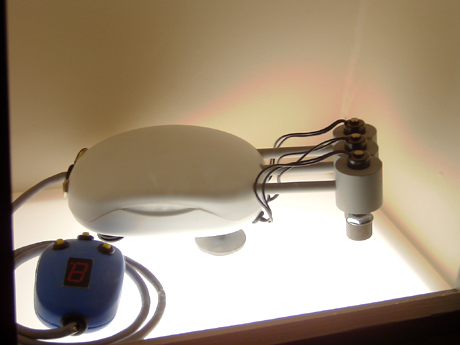 Next, “ZXZX” the device which takes over “Ren-sya” (pressing buttons rapidly, well known among my generation’s Japanese) of the video game. I cannot see what is actually moving, but the game had an uncanny score. 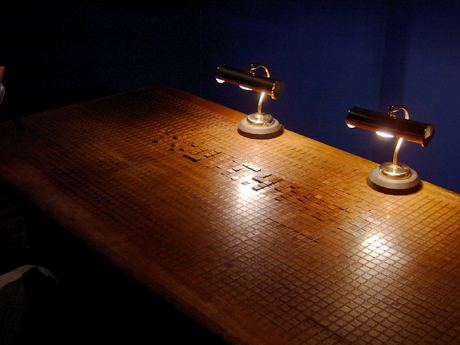 The 3rd, “An Invisible Force”. This is a table that replies to fortune-telling. The piece was his graduate work at RCA. In order to obtain an answer, you have to withstand the hot griddle.

The 4th work, “Electrophile”. This consists of mail software and a keyboard with electrode. The electroshock increases as the text length grows. This work is stronger than I expected. When I went to see it, a middle age man was writing mail, and I felt a little anxious.

The last: “F17”. In this work shoes begin to make noise if a train approaches a nearby station. While looking at it, it moved several times with a funny noise. When used at an infrequently visited station it was probably interesting. Although it could be enjoyed for its own sake, it’s interesting to me that his style is stimulated by everyday occurences, or presenting a question by shifting the viewpoint.

In their talk session, the exhibitors spoke about their shared encounters with a computer in childhood and the influence of fine arts study, the relationship between concept and technology, and the exhibition works in DAF Tokyo. Although I feel a little dissatisfied by applauding for the TV show (sorry, I didn’t) or being hard to hear, hearing the comment “exhibition is like a race, fixing is pit stop” from Ryota Kuwakubo, and the interesting opinion “In view of UK, there is a community in Japan and it is exciting” from Crispin Jones was a nice experience.