An unconventional riverside hut near Vienna raises hopes for more good contemporary architecture to be realised on the shores of river Danube.

In hot and summery Vienna, the living’s easy. The city has a lot to offer, especially to those who can’t go to the countryside or to the seaside because they have to work. Shadowy gardens and parks, numerous public swimming baths and the Danube Island, Vienna’s large recreational area on river Danube, no doubt are the most frequented places during the hot summer months. 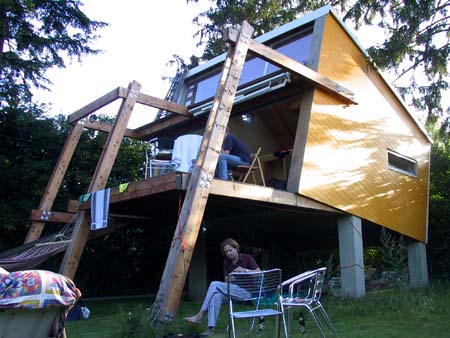 However, a lucky few leave the city for their riverside huts on the shores of some sidearms of river Danube. Klosterneuburg is one such place where people from Vienna relax and have fun in the weekends. Among them 30 year-old Roman, who always has the feeling he’s in a different world when he wakes up in his modern-style riverside hut in Klosterneuburg. 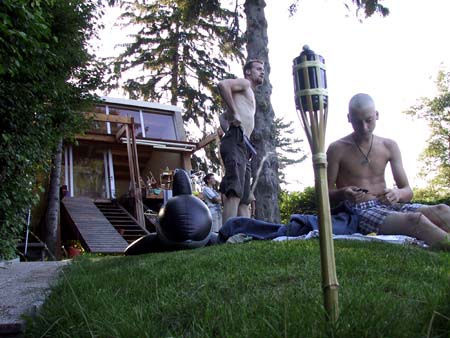 The other day I met two of the architectural team that designed and realised the low-budget “beach house” for their friend. Enter Thomas and Klaus, who have every reason to be proud of their work: what they wanted was to realise some outstanding design in the midst of rather conventional riverside huts. And if you take a closer look at the pictures you surely will agree that they’ve succeeded. 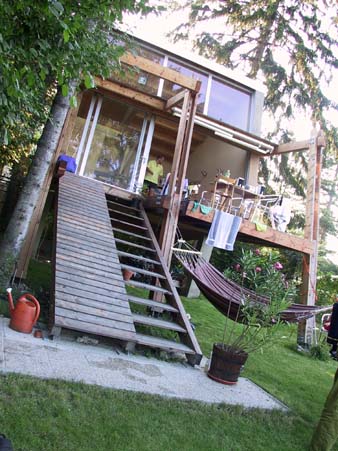 Due to building regulations in this frequently flooded area the unconventional object was built on 1.7 meter-high columns above the ground. The volume develops on a maximum footprint of 35 square meters. It contains an open living space, a cooking area, and a bathroom block above which there’s the sleeping area with a skylight that gives you the impression of flying in the sky. 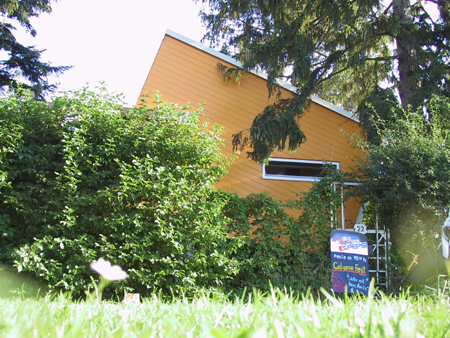 The sloping glass facade can be opened by a sliding door which expands the living area to the terrace. From there a ramp – partly designed as a stair – leads through the site directly into the water. The whole configuration creates a three-dimensional movement from the site’s back entrance to the river.

“We are lucky to have had a client who wishes to stand out against the rest with the design of his place. And we hope that he enjoys the building as much as we do”, say the young architects. Well, lucky Roman certainly does. Not only when it’s party time in Klosterneuburg…