John Currin‘s paintings, on view at the Museum of Contemporary Art, Chicago through August 23rd, present an encyclopedia of formal elements from the stylebooks of Courbet, Manet, Boucher, Tiepolo, El Greco, and Cranach. The subjects and composition – lifted from popular sources like high school yearbooks, life insurance ads and mail order catalogs – are shared with more recent art. 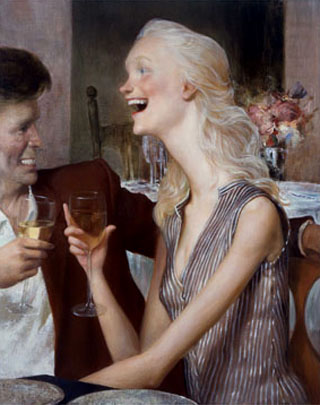 But the effect of Currin’s paintings are definitely more than a simple pastiche of these two obvious parts. As Peter Schjeldahl puts it, ‘Currin unties extremes of low-down grotesquerie and classical elegance.’ *1 What is it that makes these paintings work? 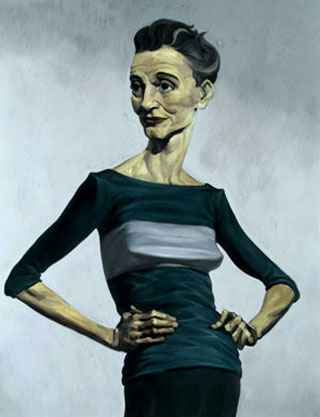 First, there is in Currin’s body of work to this point in his career, a clear conceptual development over time. Viewed in the order that each piece was produced, the viewer first encounters mousy, near-expressionless students taken from yearbook photos and featuring neutral, monocromatic backgrounds (painted in 1989 and ’90, these early paintings are not included in the MCA show). These staid young women give way to more dynamically composed middle aged women. Among the latter are several figures with significantly tweaked proportions – ‘Nadine Gordimer’ (1992), for example, is a portrait of a real-life novelist whose head couldn’t possibly be as big as Currin paints it – or references to the process of painting – ‘The Moved Over Lady’ from 1991 portrays a grimacing woman with short-cropped hair placed left-of-center on the canvas. 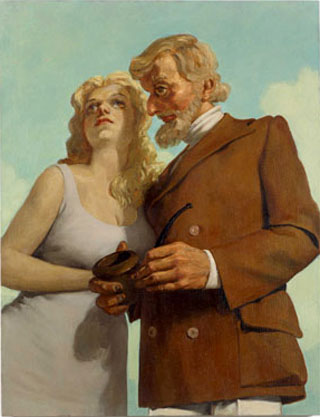 In the mid-nineties, Currin divided his solitary sitters into absurdly paired romantic couples. Clumping the figures together awkwardly dead-center on the canvas. The men in these pictures are portrayed variously as bearded women, great wide-eyed birds, or threadbare members of an outmoded Southern gentry.