“Salvanilla” and “Lap Top Orchestra” presented the live performance event “Inter/Action” on the 27th and the 28th of June at Roppongi Hills Arena in Tokyo.

Roppongi Hills is a complex cultural facility that includes several skyscrapers, a multiplex cinema, a shopping mall and an art museum. This is a new town that was developed with the point of view of the urban renovation. Roppongi Hills Arena is a circular multipurpose space with the unique concept “the urban style outdoor entertainment space”. 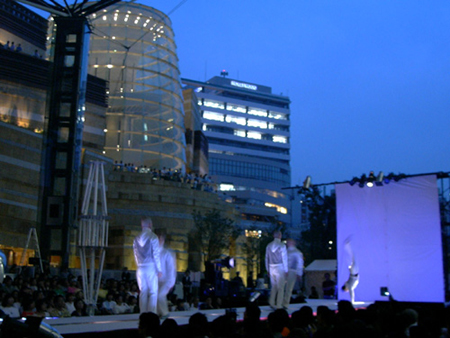 The live art performance “Inter/Action” was divided into two parts and Salvanilla and Lap Top Orchestra had a performance at each part. 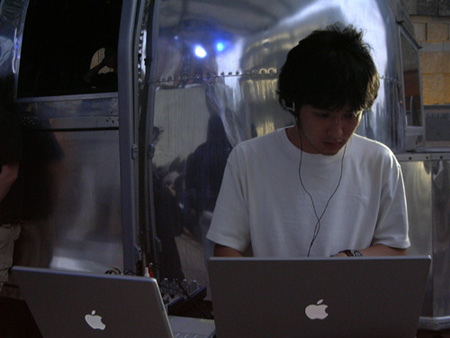 Forefront creators Christphe Charles, Takamasa Aoki and Yoshihiro Hanno appeared with lap top computers in the first performance. The lap top computer is a necessary tool in the musical process today and they presented an impromptu live performance. The style of their performance was interesting. Each creator freely played a 2-minute-sequence with rhythms and sounds that Charles made, as well as scores with keywords, and they repeated that process for 32 minutes. Sound systems and lap top computers were set in a circle in order to use the features of the circular arena effectively. Within this setting, they created three-dimensional space with sounds. 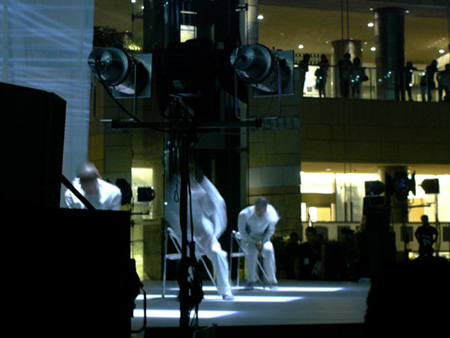 Once the performance got started, visuals were on a screen and they synchronized with the sounds.The sounds from the computers of the artists lit the screen as a real-time wave and I could visually and physically feel the sounds.It was also quite enjoyable to imagine who is making the sound during the performance.