The Mori Art Museum will open in the center of Tokyo in October 2003. As a commemorative release of the CD “Open Mind” (the museum pre open plan) the “Open Mind Live Event” was performed at Roppongi Hills Information Center/THINK ZONE on December 21st.

NUMB, and Ryoji Ikeda, and software works by Ages 5&UP, Ryota Kuwakubo, exonemo and Portable[k]ommunity.

At this live performance, we were able to experience the performance by the luxurious lineup of exonemo and Ryota Kuwakubo, who participated in software works and “L?K?O” as a special guest, in addition to all the sound work participants except Ryoji Ikeda. 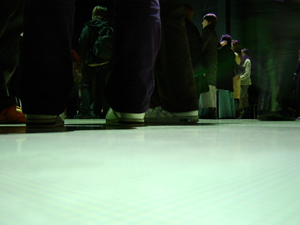 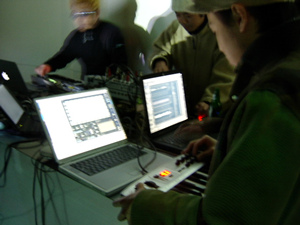 At the beginning is exonemo who put on a display of activity, mainly on net art. This time they invited Kuknacke and Yasunori Kakegawa to be the guest player. They brought us a performance by the laptop + images + electric base guitar with original software. It was a bit different from the usual web browser works, and I look forward to the next step. Their CD collected software work “FragMental Storm 02” cutups material on the internet with the user keyword, and it surprised us with unexpected image generation from simple keyword. 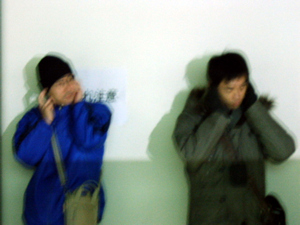 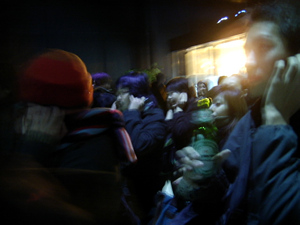 Next, Portable[k]ommunity who also put software work in the CD. In addition to the usual sound and images, they did a performance that hit the eardrum directly. After preparing the eardrum, the sounds made from analog oscillator sweep radiated from the loud speaker systems. I watched people who enjoyed the sound with surprise, those who plugged their ears, and those who left unable to endure the sound and so on. It may be the part both for and against the performance. I think this work has significance as a point of giving strong impression on with a body and a perception. 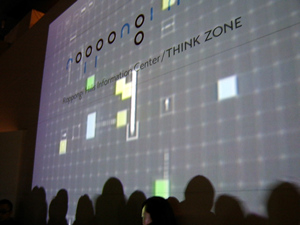 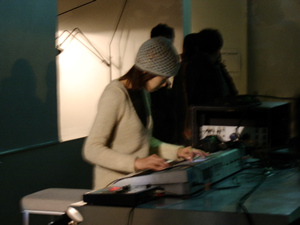 Ryota Kuwakubo who was known as a device artist played with his own software, which control sound with various blocks on the screen. The movement of objects in the software tightly corresponded with the sound. Although it was regrettable that the contrast on the screen was a little weak, the performance was enjoyable, while the motion of the object in software and the sound emitted corresponded.This allowed both hearing and sight to be enojoyed mutually. Although this software is still under development, I hope it will be open to the public. Moreover, “NewsWatch” his CD collecting software, shows the text of the news site on a web page, dodging the structure, and has brought a delicate feel which is somehow understandable.