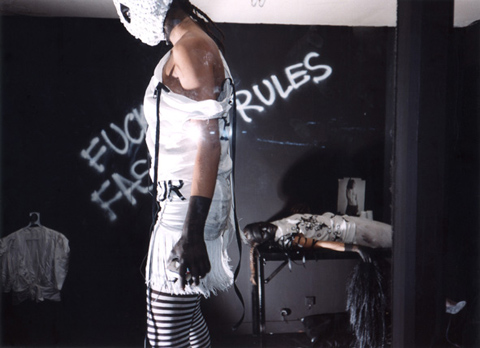 We live surrounded by brands and the art world is no different. The work of a good number of modern artists is based on this concept. Joan Morey (born in Mallorca, Spain, in 1972) is one of these. STP (I am your whore) is the anti-brand he has created. From this he develops his work, taking the fashion world as a point of reference, he examines and criticises it using his fictitious creations which, through his discourse, he makes into art. As the artist himself has stated, this criticism, more than being of the fashion world in itself is directed at the clowns who hang out around it. 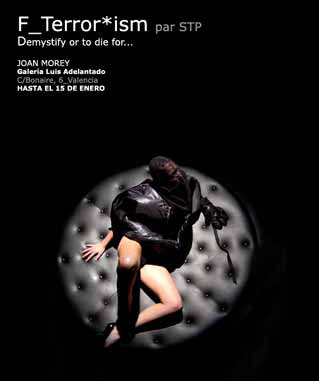 In this exhibition entitled F_Terror*ism he resorts to “terrorist methods” to provoke and condemn. Burkas or golden rain are some of the protagonists of his new works. From the outset Joan Morey has used different languages and media: fictitious publicity advertisements, performances, photographs, videos and installations with which he “publicises” his non-product. All the artistic processes which make up STP can be seen in the five spaces that are home to the Luis Adelantado Gallery of Valencia, one of the Spanish galleries which most emphasises young and vanguard art.

On the opening day, Joan presented a collection of fictitious fashion with four models who walked up and down constantly with the intention appearing bored. Yet another way of questioning and ridiculing the world of the fashion catwalk. There are, incidentally, people who think Joan is a real fashion designer; he has even received orders for his creations.