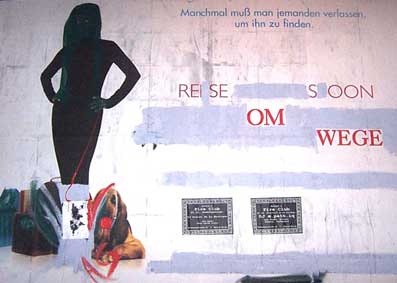 What we all like about Berlin? west or east, is the toughness and roughness this city has to offer, it is far from true poverty that we are fortunate enough not to know, but Berlin does provide the backdrop for a true modern urban lifestyle. Thanks to the rebellious nature or the simple – no one cares / learning by doing / just do it – attitude Berlin lives and it is home for some of the most out there ideas you may be confronted with. So confrontation is maybe the idea behind this months text.

In asessing the situation, in design and in life, it usually pays to step back and look at things from a different angle, so I turn to my straight outer amsterdam dutch designer friend, Eike, and my london art school friend, Ailsa, to assess the situation, so that we may possibly together, address the problem.

Eike: First off, what really suprised me is that I experience Holland so totally different now than I was still living in Amsterdam. Holland is so different from Germany. Feels like the other side of the world. I’m half German / half Dutch. thought I knew Germany. But I totally don’t. Berlin is different than Germany in general though. At least that is what people tell me and I sort of experienced it myself. More unfriendly and grumpy. But that would be generalizing. Hey but I need to, in order to point out the problems.

Paul: So, assuming there is a problem, what is it?

E: Generally people talk to much here and do less. That is very amsterdam by the way. But Amsterdam isn’t a good reference point. I don’t like Amsterdam anymore. I would rather refer to rotterdam because that city is physically more like Berlin. Raw. Uncut. Maybe because both cities were bombed in the second worldwar. Rotterdam people are do-ers. No talkers. Do your shit. And do it good. I unfortuanetly agree, Germans talk alot about the problem and dont go about the solution. 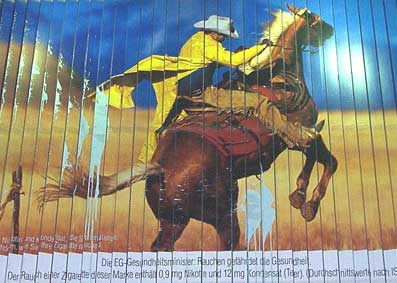 People are very passive here to. Not much undertake any action. Complaining about that there is no money, no clients instead of going and finding them. And than there’s this german angst thing. Afraid to make decisions or do things that doesn’t belong in the box called society. Out of the box thinking isn’t something that happens here a lot. Everyone wants to be safe. If it doesn’t exist in the system, it doesn’t exist at all. This angst thing goes deep. That’s why I think that German advertisements, marketing, campaigns and design are safe. Good, solid but never daring or on some edge. If I recall correctly germany has a very impressive history of design, architecture, fashion etc. where is it now?

Alisa: Berlin is undoubtedly already successful in many respects. Obviously this will always be an inherent part of the luxury of working in a field that allows us the luxury of doing what we love. Its a completely different story in London where, as a result of almost unparalleled living expenses, a sense of urgency and the apparent necessity for constant self-promotion has become entrenched in everyone’s creative process’ and socialising. We are all trying to live the dream. But the impact of financial imperatives can make the quite ugly. Berlin doesn’t seem to have this problem to the same extent. At best this can be seen as an impressive illustration of ambition and healthy competition, but at worst it can become an unrelenting source of aggressive desperation. 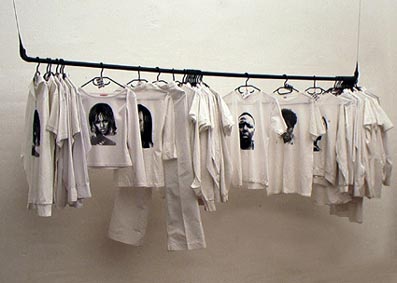 It seems to pay tribute to ‘Concept Shop’, somewhat strange in the east side of town. We relate hip hop more to the westen areas of the city? Wedding, Kreuzberg 36, Neuk?lln. Photocopied black and white posters from Hip Hop and R&B globally renowned musicans covered the neighbourhood. These portraits not only pay dues to superstars, but advertised or, heraled the ‘Concept Shop’.

The ‘Concept Shop’ extended this black and white iconography onto a small collection of clothing items. Inside the shop, browsing visitors got treated to a feisty collection of Hip Hop and R&B’s most explicit and defiant songs, blasting from the stereo, juxtaposing a shop window display of Tupac Shakurs adage: ‘Don’t judge me if you don’t know me’. Basic biographical notes provided elementary knowledge on the artists backgrounds and careers.

The stars of the ‘Concept Shop’ were maybe from the streets and using one of the most effective urban marketing areas – the tshirt – took the long way home and arrived there again. A action from the hood, for the hood, a strange mix of information, beauty, good design and advertising.

Future locations for the shop will include London and Amsterdam. The progress of the shop will be logged in the ‘shop diary’, through which ideas, thoughts, gossip, documentation, and other resolved and unresolved matters are made accessible to the public. The artists welcome any additional comments on the subject of Hip Hop and R&B. 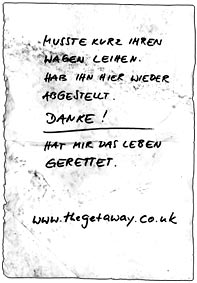 P: Urban marketing stuff is popping up. The coolest thing was the Sony Playstation thing for ‘the getaway’ a photocopied a5 sheet, I found on the street saying ‘I borrowed your car, it saved my life, bought it back, cheers…. thegetaway.co.uk real cool.

E: Yeah I saw it. I loved it. Concept wise totally right. Really cool and very original. Plus really cheap! I love that game by the way. I think that more of that and more viral / buzz marketing concepts will hit the streets of Berlin. Going back to the question. Where is it now? There are 2 streams in Berlin. Upper- and underground. The underground is very good. Cool things happen there. The Berlin underground is far more interesting than the Amsterdam underground. I think that at 1 point, undergrounders who proved themselves will go upperground. Every company wants a piece of that. If this happens it will become more common. So I actually think that in 10 years berlin will be back where it should be. The upperground? boring. They shouldn be ctrl-x’ed. What do you think what the problems are?

P: Fear and lack of money. But being broke makes you think harder and its good for your street wise. We have become so fortunate because of the luxuries around us. People get tired and lazy. I quote – get angry, stay hungry, get lean, stay mean.

E: Good point. Maybe that’s why there’s a lot of urban stuff going on plus also a lot of low budget stuff. But that’s more on an artistic level. The problem with the lack of money is more apparent in the traditional design field. No clients or clients that have no money will lead into bad design. Most of the time. But a corporate identity like Holland’s KPN is something you won’t get in a bad economy. Know what I mean? Still, all that urban stuff has it’s influence on the mainstream. Always had. And always will. Look at lodown magazine. Perfect example where underground becomes upperground. And I’m not being negative here. Besides Marok makes dope shit anyways. Yep. Not to be arrogant. I’ve seen some cool stuff here too. Pfadfinderei, Eboy, the way cbs bombs the city. A lot of spraypainted templates here. Saw a couple of Bansky’s which we’re cool. Actually a lot of cool urban stuff is going on in east Berlin. It seems like that walls, poles, actually everything is used for communication. Fucking up billboards is something you see here a lot too. Either art wise or making a statement against the commercial. You won’t see that in Holland.

P: It makes me laugh and kind makes me be proud to live here. I mean, have you ever seen a plank being nailed to a billboard as grafitti? I mean, how cool is that please? On the other side, design in public spaces is getting better, very creative, very radical. Maybe in a year or so you’ll see planks being nailed to Nike adverts from Wieden&Kennedy? With some kind catchy line like a man about the house is not a real man, nail planks to walls, just do it! 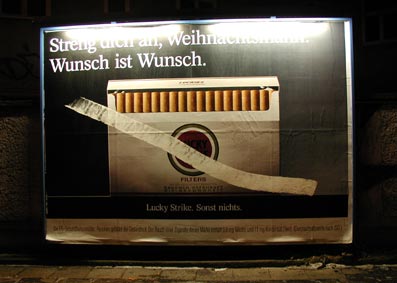 E: Yeah. You showed me that. That is cool. Quite original. I like the way how they go about fucking up billboards. I wonder who does that. and how many people are involved? There’s this one billboard on the Max-Beer-Strasse. After a couple of days it is already fucked up. Constantly. Leaving out words. Most of the times making the eyes red (if there’s a girl/guy on it). Quite interesting. In Holland people leave billboards alone. Yes. That is boring. You could do some intricate things with that. Even as part of a campaign. Aahhh, now I’m being too commercial again. Sorry for that.

Ailsa: Similarly, there is a tangible difference in the grafitti. Coming from Banksy-riddled-Shorditch means that I am probably immune to most flawlessly produced ‘interventions’ (As they are referred to in Art School…), but I have been struck by the almost naive stuff that you encounter on the streets in Berlin. There is something incredibly visceral about planks nailed to billboards and other apparently direct responses to advertising. It seems fantastic to me that as opposed to the now generic-stencil, there are people in Berlin going bombing with domestic paint rollers and baby-blue paint (The choice of colour is intriguing on its own. Begging questions about how incidental such a decision was, and how simultaneous an act was it). They feel spontaneous and reassuringly uncontrived.

P: So, what potential does this city have?

E: Alot. There’s this rebuilding, creating kind of thing. everything is new. Everything can be explored from scratch. Tabula rasa. Berlin has and will always be a metropole. It stood still for a while. And since the wall has gone it’s coming back. A lot of initiatives. Plus Berlin is raw, very raw. A lot of contrasts in everything. I only hope that they won’t turn east Berlin into west Berlin because their concept of renovating and restaurating has nothing do with keeping something with the past. But maybe they want to get rid off the past.

What do you think how to solve all these problems? Or at least what can Berlin do to change it all?

P: The city must understand that the only thing it has to offer is creativity, culture and nightlife and this must be pushed. And it all needs good design, then things may be a little more colourful. But maybe what im trying illustrate here is that good ideas dont need money, the execution costs though. What we’ve seen are alot of good ideas done cheap. Just imagine what would happen if there was cash flowing.

A: How grafitti should be? That is, of course, before you consider the effort involved to go home and get the hammer, buy the nails, find the wood, etc. The more that you think about the reality of how it physically came about, the more diverting it becomes. Is this person the Berlin equivalent of the London art school graduate who gets the job at the advertising firm, primarily for financial motives, but justifies it to themselves conceptually, by attempting to subvert it from within? I like the plank better.