Under the plain winter sky, it is fun to be an oddball and enjoy the coldness on the street, but it is even more enjoyable to have noisy get-togethers and watch experimental, oddball films with popcorn in one hand. It may be because I can see my vision getting colorful as my mind forgets a grey sky. 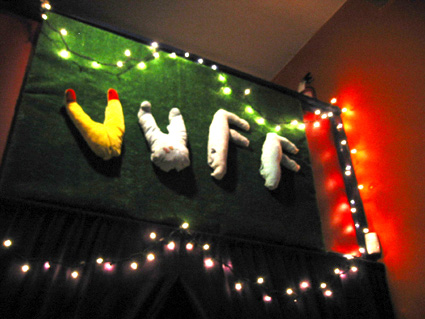 The 5th annual Vancouver Underground Film Festival, VUFF, which is presented by the Blinding Light!! Cinema started on the 21st of November. The four days of the festival showed 58 films and videos gathered from different cities like Toronto, New York, and San Francisco. 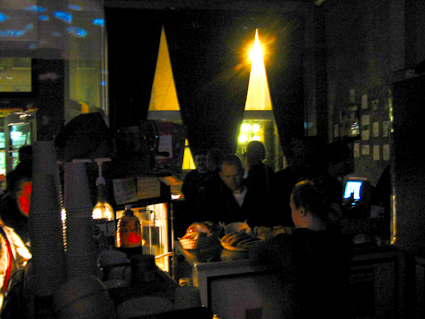 At the opening reception on the 21st, five films and videos were screened under the title of “superman, pornographer.” Starting from “Love and the Monster” of Miles Montalbano from San Francisco, “Doc 1.doc” of Solomon Nagler from Winnipeg, “Miss Edmonton Teenburger 1983 in ‘You’re Eternal'” of Matthew Fithen and Amy Lockhart from Vancouver, “The Lesson” of Sheila Pye from Toronto, the first night of the festival ended with a 40 minute long video called “Micro-Nice” by Manitoba- based artists Myles Langlois and Drue Langlois.

“Miss Edmonton Teenburger 1983 in “You’re Eternal” depicts Miss Edmonton Teenburger’s youth in a light-hearted, funny way. Lockhart describes her scenes in a deliberately kitschy, but lovely way, making this a pleasant experience for the viewer. Drue and Myles Langlois’ “Micro-Nice” is based on Drue’s comic about the mischievous plan of she-devils. The development of the black-humored story and the humorous costumes kept the audience laughing throughout the film night. 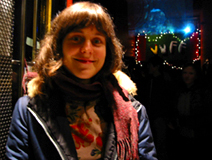 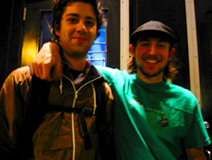 Amy Lockhart and humanfive (who made a poster design for the VUFF) were with the audience in the cinema making the film fest absolutely a gala occasion.

You can check out the four-day schedule at the VUFF website.

The Blinding Light!! Cinema, founded by Alex Mackenzie in 1998, is the only full-time underground screening space in North America. The 110-seat space has become an important place not only for underground film audience, but also for emerging filmmakers. “We’re always looking for new works to screen, and you don’t have to be an indie hero to make it happen!” as Mackenzie says proudly. Blinding Light!! provides an open mike opportunity for any filmmakers with its monthly “Bring Your Own Film Night.” Blinding Light!! is always full of new talents with fresh material, and they give support and encouragement to underground culture in Vancouver.

The grey, spiritless sky actually made me realize how vivid these new talents were… I hadn’t noticed that just by looking at it. Creativity expressed in a city makes our spirits excited; I have a good feeling about this winter, an expectation of freshness.