Comic artist Katsuki Tanaka made this month’s unique cover design. He has been expanding his field as a motion creator, and he has just released his first DVD “Sunday” How do you see Katsuki Tanaka’s world?

Hellooo! I am Katsuki Tanaka. I was born in Osaka, Japan and it was when I was an elementary student I started to make comics and motions. When I was a junior high school student, I spent all my time for club activity (tennis club), and in high school, I was absorbed in a band and break dance. I studied at a design department in an art university and I became a comic artist at the same time. I moved to Tokyo after graduating from the university and have been doing various activities since then.

You have published many comics, such as “Baka Drill (Foolish Driller)” and “Ossu! Tonco chan”. What are the comics for you?

The comics influenced me as much as TV when I was a child. The existence of a comic artist, his/her activities, the way he/she understands and thinks about things were the points that influenced me the most rather than the comics itself. The comics were an interesting adult world that seems to be able to make the view in front of me bright.

Could you give us an actual example you were influenced by?

Not only Fujio Akatsuka, Ultra man Seven, pop songs, TVs and magazines, but also I think friends, the town of Osaka and the environment around myself were very influential! 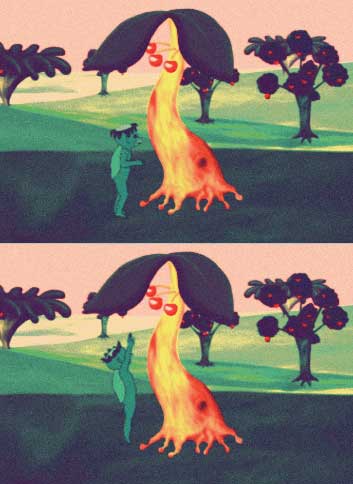 Video Frogtoise from the album “Zoomer” Directed by Katsuki Tanaka 2002

What are you careful at when you make a motion work?

I would like to know about your first DVD “Sunday“, which was released on the 29th of November.

I hope people enjoy my DVD as they play music on a player or as they keep on turning on lights. No jokes there at all.