A new arts venue is about to open doors for the arts scene in Singapore. With an ever growing arts scene together with the aim of making Singapore an arts hub, it is inevitable that a world class venue is required to cope with the ever growing demands and increasing sophistication of the audience. Hence the Esplanade, Singapore’s very own theatre on the bay. 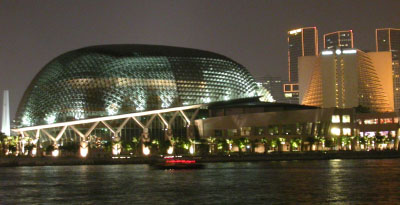 Built at a cost of six hundred million Singapore dollars, the Esplanade boasts numerous performance spaces ranging from theatres, recital studios to concert halls, all of which house world class acoustical treatment. All in a bid to attract the best to perform in Singapore. And successful they are in attracting the world’s best to perform. All 1300 of them are from 22 countries.

The Esplanade opens with a bang this coming 12th of October with the Opening Festival 2002 (13th October – 3rd November 2002) bringing an array of international and local acts together in a single union. In terms of music we see the WDR Big band Cologne with Peter Erskine (Germany), Scar Sangam (India). Johnny Clegg (South Africa). Including the exploration of musical hybrids, we see a sound installation from Stringraphy Tapestry. Theatrically we see world premieres such as the local production “Forbidden City: Portrait of an Empress.” This portrayal of Express Dowager Tzu His sees the collaboration of two local big wigs, creative man Dick Lee and singer Kit Chan.

A host of free performances have been lined up to make the Esplanade accessible to the everyday man on the street. Features include performances by local group “Urban X’change”, funnyman Kumar, jam sessions with Lincoln Center Jazz Orchestra together with Singapore’s Thomson Big Band and high energy Lindy Hop.

Literally opening with a bang, celebrations for this new addition to the city includes a half hour long fireworks display on the 12th of October that uses the cityscape as a backdrop. Coordinated by experts in three countries and put up in Singapore, it will prove to be a spectacular scene to behold.

Affectionately referred to as the “Durian” (which is incidentally known to be the King of Fruits) due to the thorn-like sun shading. It is quickly gaining acceptance by the people, judging by the throngs of people taking photos with it. The question is then whether it will rule as the arts hub in the present scattered local arts scene. It looks set to be king.