Man as “exterminator” is the figure destined to prevail now, following the ages of man as predator and producer – Paul Virilio, in video conference from La Rochelle, sums up the spirit of our times before the audience at the Ars Electronica Festival in Linz. The intervention of the French philosopher and urban designer who took part in a debate with Derrick De Kerckhove, present at Linz, was one of the events of this year’s festival which drew the most interest, centered around the notion of globalization and the role of art in this process.

“UNPLUGGED. Art as the scene of Global Conflicts” was the title of the symposium which accompanied the 2002 edition of the festival from 7th to 12th September in Linz. 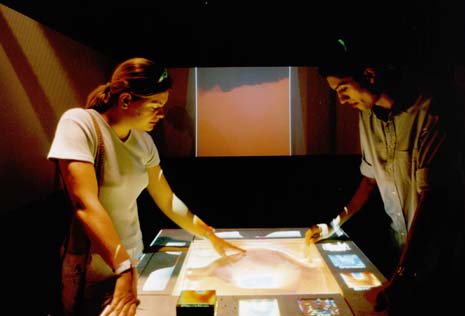 SandScape, an illuminated workbench for landscape design where the relationship between form and computational simulations is of particular relevance. Photo: Sabine Starmayr

The image conjured up by Paul Virilio is one of man totally closed to the solicitations of the real world, incapable of perceiving the amount of damage to the environment he is provoking. Subjected to the “tyranny of real time”, to the global synchronization of all opinions, man is unable to confront world tragedies. He is pursued by a kind of torpor. What art can reawaken him?

“Militancy” in Art. Ars Electronica 2002 indicates a decisive turnaround towards an accent on the political and social role of art. “After all, technology exists and functions – explains Christine Schopf from the Austrian television network ORF, curator of the event along with Gerfried Stocker – In art there aren’t so many solicitations in technical terms. It seems to us that today it is more interesting to ask oneself what impact electronic art can have on the part largely predominant in the world which is not connected to internet”. Two thirds of web sites are in English, four per cent are in Chinese whilst the percentage of web sites from African countries is close to zero. “The geopolitical scenario present is strongly characterized by the presence and diffusion of internet – maintains Gerfried Stocker, who is also head of AEC, Ars Electronica Center, the museum of technological art set up in 1996 based in Linz -. The alternative use of this global network is central in all processes of transformation. One cannot think that artists are not interested in it and shut themselves away in technological virtuosos.

“Militant” art. The exhibition “Change The Map”, presented at the BrucknerHaus is a possible response to a call for commitment from artists. The visualization of network data becomes the instrument with which to imagine a reconfiguration of political, economic and ecological equilibrium. “They Rule” by Josh On is for example a “reticular” representation of a database which contains the names of the members of the boards of the first hundred American companies according to the classification on the magazine Fortune (the “Fortune 100”). The piece, which won first prize in the Ars Electronica awards in the category “Net Excellence”, shows a giant spiders web of participation crossing over in different companies: the fatter the person, greater is the weight they carry in the various boards. The exploration of the database is intuitive and the graphic interface is attractive and easy to interpret.

Here internet is a way to highlight the interconnections which characterize the American ruling classes and the resulting conflict of interests. The visualization of data and statistics regarding economic balance is at the center of another two pieces presented at the Festival: “Carnivore” and “Logicaland“. 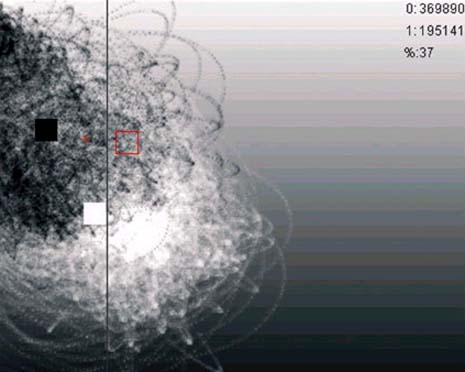 Carnivore, the work of RSG, was inspired by FBI’s program of the same name to control the contents of web communications. It aims to show that infinite sea of data normally hidden from internet users

In the first, the work of RSG (Radical Software Group) – an international collective of artists lead by Alex Galloway – the data from web sites, e-mails and data from internet traffic relative to a certain server connected to the internet are shown in a way that is graphically appealing. Inspired by FBI’s program of the same name to control the contents of web communications, “Carnivore” aims to show the dark side of the internet, that infinite sea of data normally hidden from internet users. Logicaland is instead a game of online simulation which is based on a real global model of distribution of resources and is open to participation and modifications by surfers. 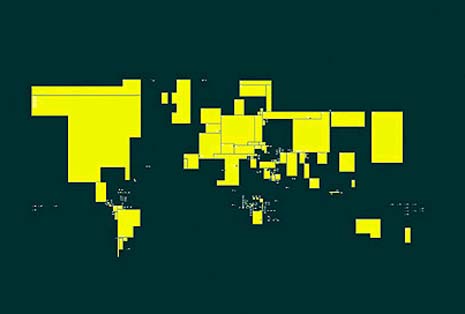 Overall the work in the Net art section shared a certain “militant” expression, where internet and the tools of visualization are just the first step, a cognitive one, in a radical protest against the current management of world equilibrium. The aesthetic quality of these works decidedly takes second place. The “Change of Map” which is referred to in the title of the exhibition does not leave space to contemplative parentheses, but invites action, in the passage from virtual to real.